The daughter of King Alfonso II of Aragón[1], Lucita grew up privileged but chafed under her responsibility to her father and family. She thought of patricide many times and often ran away, only to be caught by the Aragonese guards and returned to her father's custody. Rather than bother with disciplining the girl himself (as King, he had better things to do), Alfonse shuffled her off to confession each time, trusting that God and Church would engender penitence in his daughter. The fact that her confessor was Ambrosio Luis Monçada made this hope a vain one.

When the Withering started to affect the Kindred, Lucita sought answers for her sudden weakness, finding out that nobody knew what was happening. She allied with the former archon Theo Bell in order to stop the Camarilla's "concentration camps" of Thin-Blooded vampires. When Beckett confirmed to her that Gehenna was indeed beginning, she and Theo followed Beckett and his companion Kapaneus in his search for means to stop the apocalypse. Once they found Rayzeel, one of Saulot's childer, a great Abyssal creature emerged from the earth and tried to kill Beckett. The creature, seeing it could not kill the Noddist, assumed the form of Lucita's sire, Ambrosio Luis Monçada, and tried to convince her to subjugate. Lucita, in a last attempt to be free of her sire, sacrificed herself, letting her companions escape. Anatole appeared to Lucita in her final moments and took her soul into the afterlife before it was absorbed and lost in the Abyss.

Lucita's exact whereabouts or fate are unknown in these nights, the details no doubt being lost in the shuffle of the Gehenna War and the defection of Clan Lasombra to the Camarilla. Rumors often speak of her death, and even her execution at the hands of Talley, as part of the clan's concessions for entry to the sect.

Tall and willowy, with olive skin and dark black hair, Lucita exemplified the classic appearance of old Spanish nobility. There is no Moorish influence in her features. She typically wears the garb of a noblewoman rather than that of a warrior (surprise is her preferred modus operandi), but these clothes are often dark and somber affairs that favor ease of movement rather than stuffy presentability. 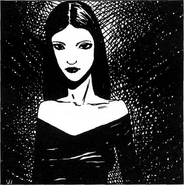 Official Lucita action figure
Add a photo to this gallery

Retrieved from "https://whitewolf.fandom.com/wiki/Lucita_de_Aragon?oldid=258740"
Community content is available under CC-BY-SA unless otherwise noted.