Lucinde is the current Justicar of Clan Ventrue and Red Alastor of the Camarilla.

Lucinde has forgotten her mortal existence long ago, instead focusing solely on the duties as an Archon she inherited from her sire and then-Justicar Severus. Since then, she had become something like an inventory piece for every Ventrue Justicar, until she fell into torpor and rose again in the 1930s.

Learning that the new Ventrue Justicar was her ex-lover Michaelis, she sought him out, only to find out that Michaelis had been replaced by the ancient Setite Kemintiri, who posed as the Justicar. Although Kemintiri tried to silence Lucinde via the Blood Bond, she managed to leak out information to the Tremere, who took her away from the Setite and to a conclave in Munich, where a global Blood Hunt against the Setite methuselah was called out and the Red List was formed.

Lucinde was appointed as the first Alastor, whose sole duty was to hunt those on the Red List – except for Kemintiri, much to her surprise. Nonetheless, she dedicated herself on the hunt against the snake which still had blood bonded her to herself. When the bond finally broke, Lucinde entered torpor, only to emerge in 1994 to find a letter of her target which planned to form an alliance between all Anathema. The Alastor began to follow the trails of the list, only to find most of them cold, until she delivered the letter to the Inner Circle. The heads of the Camarilla reacted by making Lucinde the Justicar of Clan Ventrue.

After the conclave, Lucinde, along with many Archons she had appointed, vanished, hunting Anathema and eventually finding one: the Samedi Genina in San Francisco. She and her Archons managed to stake her and send the torpid body to the Inner Circle. Afterward, Lucinde vanished, following her hunt against those who inhabit the Red List and threaten the Camarilla.

Lucinde has a Combination Discipline named after her. Through the use of Lucinde's Revenge, a vampire becomes protected against the effects of the Presence used by higher generation vampires. 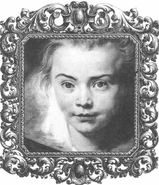 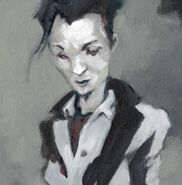 Lucinde in The Chicago Folios

Retrieved from "https://whitewolf.fandom.com/wiki/Lucinde?oldid=248482"
Community content is available under CC-BY-SA unless otherwise noted.