Lodin, born Olaf Holte, was the Prince of Chicago and was one of the most influential Camarilla rulers in the United States until his Final Death in 1993.

Olaf Holte was born to a pair of Norwegians who moved to the North American state of Pennsylvania in 1830. He fought in the Mexican-American War and earned praise during the battle of Veracruz, when he took the city and its important artillery positions. In Veracruz, he met his future sire Datura, and its prince, Eletria, who searched for militaries to use for controlling the city's kine.

The Prince felt the strong urge to Embrace him, but feared the jealousy of Datura and instead asked her to give Holte the Embrace. Holt stayed for 22 years in Veracruz, long after the occupation had ended, and learned the ways of the Kindred. It was only when his sire got jealous of the attention the prince gave him that he was forced to leave, instructed to make his own princedom elsewhere. He traveled to the city of Chicago and presented himself as "Lodin" to ruling prince Maxwell. As soon as he had entered the city, however, he began making plans to usurp the prince's position.

Lodin's opportunity presented itself with the destruction caused during the fire on Devil's Night of 1871. He did not waste any time and attacked Maxwell's mansion in the mayhem that ensued, driving the prince away after a brief battle. Afterward, his reign was relatively stable, until Modius rose to challenge him from his princedom in Gary. In the following years, Lodin became more and more paranoid, fearing being usurped like he himself had usurped the princedom, and began creating a large brood to help him keep power.

Lodin never realized that he had been nothing but a pawn in the Jyhad between the methuselahs Helena and Menele, until he met his Final Death during the War of Chicago. According to Chicago by Night 5th Edition he survived, but now in hiding. Scarred and deformed at the hands of Lupines, Anarchs, Sabbat, and his former allies in the Camarilla, Olaf is not even a shadow of what he once was.

Prince Lodin and his men. Art by Joshua Gabriel Timbrook 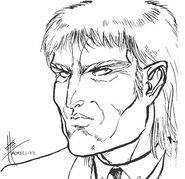 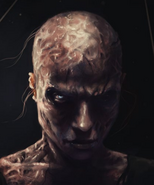 Scarred and deformed Lodin from Chicago by Night 5th Edition

Retrieved from "https://whitewolf.fandom.com/wiki/Lodin?oldid=240677"
Community content is available under CC-BY-SA unless otherwise noted.