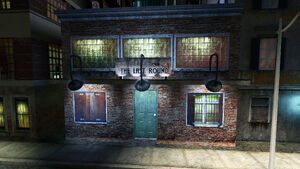 The Last Round is a bar in Downtown Los Angeles, next to an overpass. It's known as the central gathering of the local Anarchs, particularly Armando Rodriguez and his coterie, Damsel and Skelter. Smiling Jack can often be found here as well.

Retrieved from "https://whitewolf.fandom.com/wiki/Last_Round?oldid=263614"
Community content is available under CC-BY-SA unless otherwise noted.