Kumo, also known as Goblin Spiders, are the Asian branch of the Ananasi.

The Kumo are regarded as traitors by most of their western brethren, for they have allegedly chosen to ally with the Wyrm over their Queen. However, even the Kumo have their place in the Ananasa’s web, corrupting and killing to her ultimate design, since they have been duped into believing they serve only the Wyrm.

Like every Ananasi, the Kumo have no Rage and are unaffected by silver. Instead, they use the blood of their victims to fuel their gifts. However, Kumo are vulnerable to weapons made out of hong mu, a rare and fragrant variety of red rosewood.

The Kumo have access to the four regular forms of the Ananasi, Homid, Lilian, Aghora (Pithus) and Thousand Fang (Crawlerling). However, their Lilian form have an extra set of lungs that can breath water, and their Pithus form have a supernaturally tainted venom that even affects supernatural creatures.

The Kumo are all Hatar, and have no Tenere or Kumoti among them. They are consolidated into three families dedicated to different aspects of the Triatic Wyrm. The families watch their monopoly, eradicating any offshoots that would threaten their supremacy.

Outside the Way of Emerald Virtue and without Auspices, the Kumo are not really respected by the other Fera, who see them as traitors and dangerous enemies. Kumo learn Ragabash gifts and progress in Rank with a total of seven Renown in any combination of Glory, Honor and Wisdom.

There were some rule updates in CB20. Homid Kumo start with 1 in Gnosis, just like their Western cousins. A Kumo starts with one general Ananasi Gift, one Hatar Gift (expanded with their own gifts), and one Ragabash Garou Gift. The stats on their different forms are now identical to that of their Western cousins. The Kumo learn Gifts from spirits, mostly from banes. Despite that their breed as a whole serve the Wyrm, only the most corrupted Kumo smell of the Wyrm. They do not revere Queen Ananasa, but still seem to play a part in her plans. 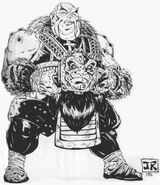 Lilian form.
Add a photo to this gallery

Retrieved from "https://whitewolf.fandom.com/wiki/Kumo?oldid=243270"
Community content is available under CC-BY-SA unless otherwise noted.