Kitsune are werefoxes, the youngest of the Changing Breeds of the Classic World of Darkness.

Unique among the Fera, the Kitsune are found only in the Middle Kingdom, living mostly in China and Japan. Their animal form is a fox, and they serve a role in the Emerald Courts of the Green Mother similar to that of Ragabash in Garou society. Since they have rarely (if ever) ventured outside Asia, the Kitsune were never a target in the War of Rage, and apparently did not exist during the War of Shame.

Kitsune often try to teach lessons through their tricks. Seeing as they were created with the last of the strength of the Emerald Mother, they cannot heal how the other changers can. They also do not cause the Delirium in humans, as they never were part of the Impergium. They are affected by silver just as any other breed with Rage; they are, however, unable to assume any Frenzy but Fox Frenzy.

Formed in the last days of the Fourth Age, the Kitsune trace themselves back to Bai Mianxi, who was brought by Luna before Gaia to receive a duty from her after the witty fox had created havoc on earth with her jests. Bai Mianxi, however, tried to trick her way out of her obligation, citing that Gaia's other children were all adequate enough in their duties and she was not needed. Gaia's wrath at Bai Mianxi's impudence shook her residence, but after soothing words from Luna, she gave the first fox-shifter three promises: In return for her service, the fox-people would become the best at something some day. She would protect the Kitsune through the Sixth Age and release them from their servitude in the Twelfth Age, when the Wheel of Ages would come full circle.

With Luna's blessing, the Kitsune acted as assassins of the corrupt authorities in mortal society, as court wizards and thieves in order to protect the Heavenly Mandate. With no Western counterpart to identify with, most fox-shifters see themselves as part of the Hengeyokai first and members of their Breed second, although many eschew joining the Beast Courts directly.

The Paths of the Kitsune constitute both a profession and something of a sacred calling. They are not determined by the sun, moon, or the Kitsune’s time of birth, but are chosen by each Fox as she gains her first rank. Each Path is aligned to a blending of two of the primary elements as a singular element in and of itself.

The Kitsune have five different forms, like the forms of the Garou. All forms other than Hitogata naturally show one tail and all Kitsune gain another while advancing their rank with the maximum of 9 (only Bai Mianxi has ever manifested nine tails). In any of his forms, a Kitsune may manifest any number of additional tails (up to the maximum he possesses) by making a Gnosis roll against the local Gauntlet. Once manifested, he may hide them in the same fashion. These forms are:

Kitsunes are often versed in sensing the flow of chi, both yin and yang, in the world, taught by any spirits of the Middle Kingdom. They can become invisible through their "Moon Dance" so long as no moonlight is touching them, can use "Ghost Speech" to speak with the inhabitants of the Yang World, can easily blend into a crowd, can create very lifelike illusions, and the most gifted can abandon their own body to possess that of someone else.

Kitsune simply adore magic, which they call Jyu-Ho. Any trick is better with a Gift thrown in; success is sweeter when elders offer lessons as reward, and Rank more prized because of the new power Gaia grants with each tail. In a scant few millennia, the Foxes have coaxed the spirits to grant them a wide array of tricks, picked up hedge magic, reinvented an entire branch of witchcraft, and stolen, toyed with, and abandoned the Bastet's Gift-swiping ability.

One thing that all Kitsune can learn through other Kitsune they know is Ju-Fu (paper magic). By trapping Kami into the paper, they can make or do virtually anything.

Given to Bai Mianxi by Luna, the Heavenly Mandates are the laws of Kitsune society. It consists of four obligations, four bans and an absolution.

The Kitsune were first introduced in the Appendix of Caerns: Places of Power, where they are portrayed differently. Here, they are servants of the Wyrm of Balance that fight against both Weaver and Wyld, unaffiliated with any larger shapeshifter community. 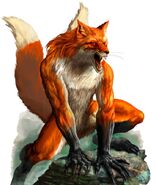