Animalism, Chimerstry, Fortitude
The Kinyonyi are one of the Legacies of Laibon. They take their name from the Luganda word for "bird", reflecting their tendencies to constantly travel, even more than the knowledge-seeking Akunanse. The Kinyonyi usually work as messengers, can seek out special items, or carry out jobs, illegal or legal, for other Laibon. The Kinyonyi are said to have migrated centuries ago from the East, and some believe they are connected to the Rom, and perhaps to Clan Ravnos; their ability to use Chimerstry hints strongly at this. In spite of their outsider status, the Kinyonyi have been around long enough to integrate themselves completely in with Laibon society, unlike the relative-newcomers, the Ishtarri. In terms of the Embrace, the Kinyonyi are drawn towards the self-sufficient and those who have useful skills of almost any kind.

The Kinyonyi also maintain a loose network among their legacy; if one needs something they cannot find themselves, they can easily contact another Kinyonyi who can procure it for them. They meet every so often to compare notes, swap stories, and trade "business" tips.

The Kinyonyi are welcome almost anywhere, but if they stay in an area for too long, they are prone to driving themselves away through a lack of tact; a wrong comment might even result in them being hunted down. It is this weakness that keeps them constantly on the move. In addition, a few years ago, several members of the legacy were struck by a blood-thirst from an unknown cause, resulting in diableries and Frienzies that took down their numbers, especially elders. Some Kinyonyi now remain aloof from the legacy, afraid to be around others if such an event happens again.

The original outline for the Ebony Kingdom book confirms that the Kinyonyi are intended to be a Ravnos bloodline. 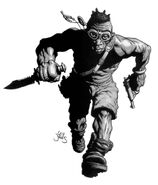 From Kindred of the Ebony Kingdom. Art by Leif Jones