White Wolf Wiki
Register
Don't have an account?
Sign In
Advertisement
in: Games, World of Darkness, Kindred of the East

Kindred of the East 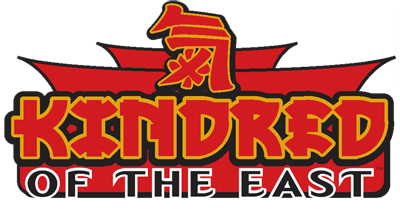 Kindred of the East (translated on marketing materials as "東洋の血縁", lit. "Oriental blood ties") was a supplemental series for Vampire: The Masquerade focusing on the vampires of Asia, called the Cathayans or the Kuei-jin.

Players in KotE played Kuei-jin, the undead of Asia. Kuei-Jin were descended from the Wan Xian, immortal god-heroes of the First Age (and the predecessor to the Exalted). The Wan Xian betrayed the mandate of Heaven and were cursed to live on blood and shun the sun. Since that time, the Wan Kuei, the fallen Wan Xian, have developed a redemptory religion while occupying an ecological niche akin to Western vampires.

Kindred of the East differs from Vampire: The Masquerade in both theme and mood despite sharing a common game system. Where Vampires tend to lead a solitary existence dominated by their hungers, Kuei-Jin are more elegant kings of the night with a far more complex political system, an extremely formal net of obligations and far flashier disciplines. KotE is heavily influenced by Anime and Wuxia genres.

Unlike western vampires, Asian vampires are created when a criminal, or someone who dies in a violent fashion escapes Yomi Wan and returns to the land of the living. The Cathayans are not descended from Caine and are closer to a form of Risen than a western vampire. Once risen, a Cathayan is a chih-mei, a barely sentient creature dominated by its hunger for chi and forced to live on flesh. When chih-mei rise, Cathayans of the various courts capture them and civilize them, reawakening their higher consciousness and turning them into productive undead.

Where western vampires are generally degenerating, the Cathayans follow a set of Dharmas, various religions which define ethical behavior. Each Cathayan has four virtues: yin (death, passivity, intellect), yang (life, activity, passions), hun (intellect and noble action), and p'o (violence and negative emotion), and each Dharma espouses enlightenment through some combination of these virtues. As a Cathayan advances in their Dharma, they achieve greater power, including the ability to feed on blood, then breath, then the ambient chi of the universe. There are five dharmas, inherited from the Grand Arhat Xue:

In addition to these five dharmas are several heretical dharmas which may or may not succeed. The ultimate goal of a dharma is to liberate a Kuei-jin from their undead state and there are recorded kuei-jin, bodhisattvas and arhats, who have done so.

Kuei-Jin do not have generation, humanity, or the traditional virtues. They have the four virtues mentioned above and a dharma attribute, rated from 1 to 10. Dharma functions more like Arete in that the character steadily gains it during the game, although ratings above five are inordinately hard to acquire. Characters at Dharma zero are unplayable, characters at Dharma 10 have achieved the Hundred Clouds and "won the game". Dharma substitutes for generation when considering a character's power.

Instead of blood, Kuei-jin use chi to power their Disciplines; the chi virtues will oscillate fairly heavily during a game. Kuei-jin disciplines are generally flashy; characters often have Demon forms and master shapeshifting shintai disciplines. It should be noted that there is no Masquerade in the Middle Kingdom, and Kuei-jin have an accepted role to play in society.

Instead of a beast, a character has a P'o, which is a distinct personality that behaves like the Shadow in Wraith: The Oblivion. Kuei-jin are prone to both hunger and fear Frenzies and also a situation where the P'o takes over the character, called Shadow Soul.

Kuei-Jin have access to a wider variety of magic; instead of a distinct Thaumaturgy-style discipline, Kuei-jin purchase rites (their version of rituals) as a background. Rites can have a variety of effects.