Warlord of the Camarilla

Karsh is a towering mass of strength and sinew – a lion-maned colossus, broad-featured, dusky-skinned, crisscrossed from head to toe with the scars of a thousand battles. He is brooding and silent, due to either the ennui of immortality or the sheer self-assurance cultivated through centuries of solitude. It suits his purposes to be perceived as simple; when he speaks, however, his words are curt and carefully chosen. The stoic silence into which he retreats is interrupted only by the killing machine let loose whenever he takes the field. This bloodthirsty side, unconquered and uncontrolled, leads many to whisper that he is becoming that which he most despises.

There are conflicting tales about this vampire's past, with many historical inconsistencies. The first and only postulate to hold the title of warlord, Karsh rarely speaks of his past.

A background check on him will inform that he was originally a Janissary named Hassan al-Samhir, a man who sided with Sultan Murad IV when the Janissaries revolted on 1631 and fought for years in the Ottoman–Safavid War. When the war ended in 1639, he spoke loudly against the peace and some of his resentful rivals had him framed for the deaths of three Persian diplomats. The Sultan came down on him and ordered him executed in a cruel fashion: by throwing him to the wolves.

Hassan killed an entire pack of the beasts before being chained in a desolate wasteland known to be haunted by evil wolf spirits, waiting to be torn apart or die of starvation. After a night of blood-curdling howling, they returned to find Hassan with a thousand slashes and drained of blood. However, that was not his end, because that night he clawed his way out of the grave and destroyed the men who had betrayed him. He decapitated the sultan and anointed Köprülü as Grand Vizier of all the Ottoman Empire.

Twenty-five years later, after finishing his mortal affairs, Karsh joined the Camarilla as he had promised his sire – rapidly rising within its ranks, becoming the right-hand man of Hardestadt and the Inner Circle.

From what  little can be pieced together, others believed him to be the Seljuk Hassan al-Samhir, conqueror of Manzikert, greatest of generals, who served two sultans of the fledgling Ottoman Empire, he whom the Turks exalted in the verse "Samhir, great Samhir, inexorable Samhir, mightiest of warriors beneath the ancient blue sky."

Although undefeated and unwaveringly faithful, Hassan's pride was his single, unforgivable shortcoming. His heroic standing among the people, coupled with his lust for battle, earned him the mistrust of Murad I, his second lord, who was not half the man his predecessor had been. This friction, fueled by the general's incessant protests against the corruption for which the sultan's reign became known, ultimately exploded into enmity when Hassan's rivals betrayed him. Hassan was branded a traitor, sentenced to death, and forced to stand before the empire he once protected for confession and eventual execution.

But the warrior did not die easily. Calling upon Allah to defend his innocence, Hassan met the sultan's torturous trials. Stoned, subjected to single combat, even pitted against the fangs and talons of animals — all these tests and more he endured in the name of Murad's "justice". At length the ruler, who could no longer continue his persecution against a hero of the Turkish nation, condemned his once-enforcer as "no man, but a savage creature wearing flesh as does a man, lean and hungry as are the beasts of the wild for the blood of children and innocents." With this final curse, Hassan al-Samhir was exiled, left without shelter or sustenance in the great erg, there to find his death, only to find the Embrace.

Virtually nothing is known of the fledgling's whereabouts or activities in those early nights. Some believe he simply wandered for a time, grappling with the uncertainties of his new existence and brethren; others point to Eastern accounts of a semi-mythical figure called the Khayyim, a warborn creature roaming the desert sands in search of the adversary who could end its unnatural existence. Still other sources maintain it was none other than Hassan, riding westward by night with the Tatar hordes, whose hand rose to crush his once-beloved homeland decades later.

Cainite historians tell tales of an auspicious meeting some time not long after between undead hand and unbroken will. It was there that Hassan al-Samhir pledged eternal fealty to an immortal calling himself Hardestadt of Ventrue, leader of men and monsters, a being whose words swayed nations, and bearer of an uncanny intellect, who knew words would not always be enough. Hassan al-Samhir gave his oath and became Karsh, the Warlord of the Camarilla.

Tonight, Karsh presides over a dedicated body of rapid-response teams from a decommissioned military fortress in a North American mountain range as guardian of Rafael de Corazón's dream. Although dismissed by allies and enemies alike as a dangerous, mindless juggernaut, he is cognizant of the fact that war must be fought on many fronts and strives to keep abreast of the tactics and technologies of this century.

Unbeknownst to all but a select few, the Warlord has retaken more than one Sabbat-held city through covert political and paramilitary methods, rather than the brute force for which he is typically known; he is possessed of and equally proficient with a wide variety of  weapons, ranging from traditional counter-guerilla warfare to contained "industrial accidents", inner-city police death squads, and quarantines fronted by the Fort Collins Center for Disease Control.

Unlike most Gangrel, he remained with the Camarilla even after their clan departed the sect en masse under the leadership of Justicar Xaviar. This continued loyalty brought Karsh and Xaviar into direct conflict after the Archon Theo Bell went rogue – a conflict that ended with Karsh staked and thrown into the Atlantic Ocean.[1]

The many historical inconsistencies about Karsh's past raise suspicion about the veracity of the tale. The Battle of Manzikert was fought centuries before the rise of any "Murad" Sultan to power, especially Murad IV (as pointed out in Children of the Inquisition).

One common theory holds that Karsh and Jalan-Aajav (his counterpart in the Seraphim of the Sabbat) are actually different identities used by the same individual, who was originally known as Qarakh during the Dark Ages.

Karsh and Jalan-Aajav have identical game statistics in their respective profiles in the book Children of the Night. If this theory is true, then Karsh's origin among the Janissaries must be a cover identity, as the origins of both Qarakh and Jalan-Aajav are verifiably dated centuries earlier, to the time of the Mongol invasion of Europe. It is possible that "Hassan al-Samhir" existed, and that his identity was usurped by Qarakh through subterfuge or diablerie.

Another theory holds that both, Jalan-Aajav and Karsh, could be the product of a 4th generation Gangrel methuselah with access to the high-level Protean Discipline known as Dual form, that allows a vampire to physically split into two semi-independent bodies.

Karsh, Warlord of the Camarilla

Karsh swings his sword and enemies fall; persons who have touched him claim his skin has acquired the strength of diamonds

Path of the Feral Heart 6 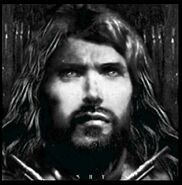 Retrieved from "https://whitewolf.fandom.com/wiki/Karsh?oldid=229679"
Community content is available under CC-BY-SA unless otherwise noted.