Karl Schrekt was a very powerful Kindred who occupied the position of Justicar for the Tremere until 1997. Anastasz di Zagreb (the current Justicar), served as one of his Archons.

It is not clear if Schrekt only served a more limited amount of time, but refused to realize the fact and went on enforcing the rules of the Camarilla. It is said that Ulugh Begh is his rival within the clan, while Gustav Breidenstein is his mortal enemy.

In life, Karl Schrekt was a demon hunter from Vienna. A driven man, he was Embraced by his sire after being defeated in a difficult struggle. Surviving the fires of the Inquisition (a bitter and painful irony for a man who once hunted demons) he came to the conclusion that the Camarilla was the single greatest event in Kindred history.

In 1575 he was sent to Berlin by the Inner Council to investigate the death of one of their clanmates at the hands of the prince of that city. He was met harshly by Gustav Breidenstein, who staked a formal letter of apology to the Tremere and pierced it through the Justicar's heart. Since then, Schrekt has kept a grudge against the Prince of Berlin.

He served for a long time as the Tremere Justicar, pursuing his duties in an almost fanatical fashion. He believed that the Camarilla was about all Kindred and so was one of the first Justicars to make it a point to select their Archons from other clans, even going so far as to have a Setite Archon for a time. During his tenure it was rumored that he somehow diablerized a Lupine and gained generation from the act.

Schrekt stopped being a Tremere Justicar in 1987, but word has it he has continued to operate as if he still held the office. He resides currently in Castle Schrekt near Linz, Austria. Furthermore, he founded the E Division among the Archons, as a means to investigate paranormal occurrences that were beyond the experiences of most Kindred (although he did not choose the name, much to his chagrin).

Clan Tremere is a hollow reflection of its former glories. With the Pyramid decapitated and its leadership scattered, Tremere traditionalists look to one vampire for authority: former Justicar, Karl Schrekt. A legend within his own clan and the Camarilla, Schrekt hunted vampires before his Embrace 1235. For centuries, he acted as the Camarilla's weapon against the Sabbat, Anarchs, and occult menaces. He suppressed or destroyed lore regarding Antediluvians, eliminated countless threats to the Masquerade, and did it all without mercy. He earned his share of disciples, but few enemies. Those he got, he killed. Now he is one of the eldest Tremere remaining. Schrekt's descendants largely follow their ancestor's hard-line clan and sect views: enforce the Traditions, strengthen the clan, and hide the secrets of Blood magic from other vampires. 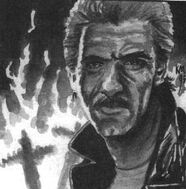 Karl Schrekt as he appears in VtM: Heritage
Add a photo to this gallery
Retrieved from "https://whitewolf.fandom.com/wiki/Karl_Schrekt?oldid=240660"
Community content is available under CC-BY-SA unless otherwise noted.