Julio Martinez is a Nosferatu antitribu, a Bishop of the Sabbat, an infernalist, and the childe of former Justicar Petrodon.

Martinez was Embraced by Petrodon to act as his spy and enforcer. When Petrodon learned of the growing Sabbat presence in Mexico, he sent Martinez to investigate the affair. Martinez, however, was captured and put under severe torture to gain informations about Petrodon's activities.

After telling everything he knew, he was released and introduced into the Sabbat. What his torturers did not know was that Petrodon had fed them with wrong information through a sympathetic link with his childe transferred through the Blood Oath. The misinformation soon led to the destruction of the responsible pack, leaving Martinez alone in Mexico City.

Angry at his sire and his abuse of him, Martinez began to involve himself in Sabbat politics, supporting Melinda Galbraith's rise to power. He acted as her spy as he had served his sire, eliminating and bribing her enemies into submission.

By the time of Samuel Haight's final gambit, Martinez and the rest of the Mexico City warren had fallen to the temptations of the sleeping Baali methuselah Huitzilopochtli that lay beneath the city. 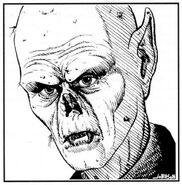 From The Chaos Factor. Art by Scott Johnson 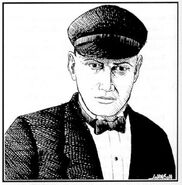 Retrieved from "https://whitewolf.fandom.com/wiki/Julio_Martinez?oldid=226039"
Community content is available under CC-BY-SA unless otherwise noted.