Josef von Bauren is one of the Founders of the Camarilla.

Bent and twisted, von Bauren's skin is covered with greenish warts which give him the appearance of a gigantic toad. He stands just under five feet tall, but carries his left shoulder higher. Ironically, he wears the cowl and robe of a medieval monk.

Von Bauren's sixth level of Obfuscate allows him to hide large inanimate objects. The Nosferatu is never hasty, weighing his words and options before committing himself. Well respected, for he speaks only when he has something important to say, he hates waste of any kind, be it gold, Kindred, or kine.

Around the 19th century, von Bauren was the Cainite among the Founders that could be credited for the continued existence of the group. He resided in the German city of Munich, in a decrepit opera house. Additionally, he came to drink only the cold blood of corpses.[1] 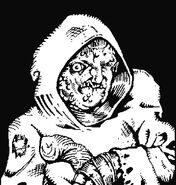 Retrieved from "https://whitewolf.fandom.com/wiki/Josef_von_Bauren?oldid=229145"
Community content is available under CC-BY-SA unless otherwise noted.