Jonas Albrecht, of the House Wyrmfoe, is a homid Ahroun werewolf, the King of the Silver Fangs tribe and bearer of the Silver Crown. His pack includes Mari Cabrah and Evan Heals-The-Past.

For a significant period of his life, Jonas was a prince in exile. The grandson of King Jacob Morningkill of the North Country Protectorate (southern Vermont), he was the favored son of the Silver Fang court, but madness was slowly devouring his grandfather, and the old garou began lashing out at anyone handy. The final blow came when Albrecht singlehandedly defeated a Wyrm-beast that was preying on the protectorate. When he presented the carcass to the king, Morningkill demanded that Albrecht kneel in supplication. Albrecht refused to cheapen his glory by showing submission and was banished.

He began wandering New York City, where he was accepted by the local Bone Gnawers. His pride and regal bearing gradually slipped away, and he turned to the bottle to help ease the pain. During one of his forays, he ran across the territory of Mari Cabrah of the Black Furies. The two fought, and Albrecht barely beat her, giving her a nasty battle scar - their bitter rivalry lasted for about two and a half years but eventually grew into a close friendship through the intervention of Evan Heals-The-Past, and they became a prominent pack.

Some time later, a pack of Black Spiral Dancers murdered the king Morningkill, who expressed his last wish that Albrecht be brought home. Albrecht was attacked by two exiled Silver Fangs almost immediately, but he went into a frenzy during the fight and killed them both so they could get no information from them. When the Silver Fangs sent a messenger after him, the garou didn't know anything about the attack. Albrecht was reluctant to go and his pack hated being left behind, but the Silver Fangs were paranoid with the king's death and wouldn't let any outsiders into the territory.

Albrecht was one of two Garou who could reasonably claim succession rights. The other was Lord Arkady, an exiled Silver Fang from Russia of Pure Breed, and one of the king's favorites. Greyfist, an old friend of Albrecht's and the king's seneschal, had suspicions about Arkady because he and his pack had showed up just after Morningkill's death to announce that Arkady was of royal blood. They were, of course, too late to join in the fight. It was eerily convenient.

Arkady had also been directly behind the exile of the two werewolves that attacked Albrecht, and slighted Albrecht during his grandfather's funeral rite, which resulted in Albrecht snapping and formally challenging him to a klaive duel for the kingship, though he hadn't wanted it before. Albrecht tripped and lost the duel (a suspicious event, because the ground was completely flat). One werewolf told Greyfist he thought he'd sensed a bane on the field that tripped Albrecht, but the traces were too faint to be conclusive evidence. Still, it confirmed what Greyfist had suspected: Arkady was probably corrupted.

Albrecht and his pack embarked on a quest into the Umbra to search for the Silver Crown. This was a long-lost Silver Fang relic, a gift from the tribe's totem, Falcon himself, that conferred unto its bearer the indisputable kingship of all garou. However, if someone unfit to rule tried to wear the crown, it would kill them. If Albrecht could find it and return to the sept wearing it before the coronation, disaster would be averted.

The pack, after consulting with a scholar who had been studying the legend of the crown, set out to look for it. They ran across half the Umbra with no sign of the thing. Eventually the pack was captured by Black Spiral Dancers. They were taken into the bowels of their hive to meet with the hive's queen, an especially freakish and violent Garou. It was revealed that Arkady was in fact working with the Spirals. The hive kept Albrecht's pack hostage and, in exchange for their lives, the queen ordered him to bring her the crown. With no choice, Albrecht had to agree to her terms.

Lost in the spirit world, he fell into a glade of birch trees that belonged to the spirit of an ancient Silver Fang king, the last bearer of the crown. He warned Albrecht of its terrible power, how it could destroy a man by forcing those around him to obey his will. Albrecht spent precious time arguing with the dead king to try to get him to say where it was, and he may have been trapped in a contract with the spirit if an emissary of Falcon hadn't appeared and led him out. Albrecht chased after the Falcon spirit and it led him back to New York and down an abandoned subway tunnel. Behind a ruined wall he found the remains of a once-grand marble hall that had served as a Silver Fang court. Hidden in this chamber was the crown, but before Albrecht could claim it he was ambushed by Arkady and his Dancer allies.

They had been watching him and set this trap, bringing Albrecht's packmates along to prevent him from fighting. Arkady gloated over Albrecht, but agreed to let him and his pack leave alive if Albrecht agreed to an appropriate punishment for conspiring against him. The first king to wear the crown in the legends had to endure many trials, and one among them was the most brutal: Arkady decided it was appropriate here that Albrecht was to have his claws and teeth removed, and then be skinned with a silver knife.

To save Evan and Mari, Abrecht submitted. He only survived the ordeal by being a stubborn werewolf blessed with unusual endurance and regenerative abilities. After the deed was done, the leader of the Dancers, Dagrack, turned on Arkady and demanded the crown - which he agreed to, with the stipulation that the Spiralswere to never use it and to hide it away. However, once Dagrack had the crown he put it on his head and declared himself king. The crown had other plans, and burned down into his skull, killing him horribly.

A skinless Albrecht and an enraged Arkady dove for the crown, with Albrecht just managing to grab it first and put it on his head despite Arkady sticking a fistful of claws in his gut. The crown melded with Albrecht's head, accepting him as worthy. The spirit totem of the Falcon appeared to Albrecht, healing his wounds. It was now his job to make his first edicts as king. Albrecht exiled Arkady back to Russia and ousted him from the Silver Fangs. Then he sent the Spirals back to their hive with the instructions to kill everything they found there, and all were forced to obey.

He turned to Falcon, nervous about his ability to be a just ruler and especially frightened by the power of the crown. Falcon then explained that the first commands given with the crown were a sort of test of whether the bearer was truly just, and that Albrecht had passed. No one would be forced to obey his commands now, but the power of the crown as a symbol to all Garou of their unity and the weight of their laws was undiminished. Falcon gathered the pack to transport them back to the protectorate so that Albrecht could be recognized by his tribe as the new king.

Jonas appears in the novel The Last Battle, in which he leads his tribe into the Apocalypse, alongside many other famous garou. While unable to fight alongside Margrave Yuri Konietzko's and Tamara Tvarivich's combined forces on the Plain of Apocalypse in the Battleground, Albrecht led a combined force of Garou for the final battle against the Wyrm. Here, Albrecht fought against the Wrym's forces, but Zhyzhak's arrival on the Wyrm itself caused some of his Silver Fangs allies to go berserk and attack him, mortally wounding him. Albrecht managed to use his Silver Crown to reinforce his strength and cut down Zhyzhak, finally killing her. He then collapsed from his own wounds and exhaustion, and died shortly thereafter.

Lord Albrecht in his youth 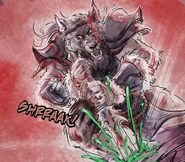 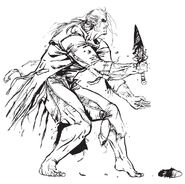 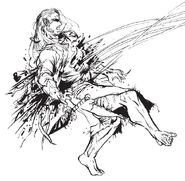 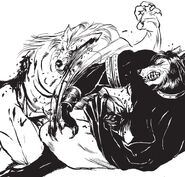 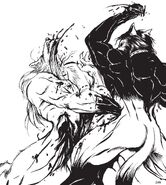 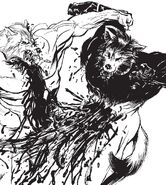 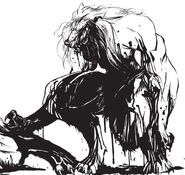 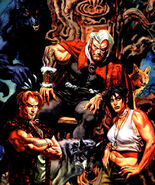 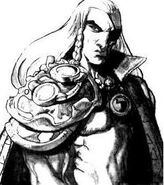 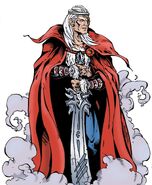 From W20 Cookbook.
Add a photo to this gallery

Retrieved from "https://whitewolf.fandom.com/wiki/Jonas_Albrecht?oldid=230096"
Community content is available under CC-BY-SA unless otherwise noted.