Jezebel Locke is a minor character in Vampire: The Masquerade – Bloodlines. She was a vampire living in Downtown Los Angeles. Jezebel was a member of Brotherhood of the Ninth Circle, a dangerous vampire blood cult in Los Angeles. It is unknown when Jezebel was sired, or how she became a member of the Brotherhood. But while she was in Los Angeles, Jezebel made use of escorts often while she was living in the classy Empire Hotel in a luxurious suite. She used these women to infect with illness, most likely through feeding off them, so they in turn would infect their clients. One such client was a young escort named Hannah, who later died from Jezebel's illness. Jezebel's actions finally caught up with her, after the fledgling began investigating the circle. When they found Hannah Glazer, one of the escorts that Jezebel hired dying in her apartment, she revealed Jezebel as one of her clients, which led the fledgling to the Empire Arms Hotel. Jezebel attempted to persuade the fledgling to join the Brotherhood, through subtle offers of sex and pleasure, coupled with her own perverse fetish for disease. The fledgling refuses, resulting in a fight. Jezebel met her Final Death at their hands.

Jezebel was a particularly sick individual, combined with the fact that she was also a particularly sexual person too. For her, sex and the spread of disease went hand in hand, but her madness went so far that she incorporated sickness into her seductions too, making promises of pleasure and illness at the same time. She was also a particularly devoted and faithful member of the Brotherhood of the Ninth Circle, putting all her effort into bringing about its goals. ﻿While she is a seductive and beautiful Kindred, she is also a very powerful vampire who uses Presence to cripple her opponent's ability to fight. 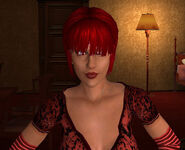 Add a photo to this gallery
Retrieved from "https://whitewolf.fandom.com/wiki/Jezebel_Locke?oldid=241731"
Community content is available under CC-BY-SA unless otherwise noted.