Jervais was born as the son of scribe in France and tutored to follow his father's footsteps. The noble, for whom his father worked, arranged that Jervais' education would take place in Paris, in the local chantry of the magi of House Tremere, where he copied several magical texts. The mages recognized a spark of magical talent within Jervais (likely the potential to become a Sorcerer), though they deemed it not worthy cultivating. Jervais endured his stay until 1088, when he met his future sire, Malgorzata, a mere ghoul of her master Goratrix at this time.

Jervais was ensorcelled by Malgorzata and told her that he would like nothing more than serve her. She enjoyed his servility and chose to take him as her own apprentice. In Ceoris, Jervais was tutored in the hermetic arts, and while he proved not outstanding in practical wizardry, he had a keen mind for occult calculations to locate the rare fonts of natural Quintessence known as vis, which became more and more valuable as the Mythic Age began to fade and those stores became rarer and rarer. Only five years later, Jervais received the Embrace at the behest of Goratrix through Malgorzata. A visiting Etrius questioned this decision, partly because the Embrace had not been permitted by [Tremere] and because Jervais was no full magus by the time of his Embrace, making him a second-class Tremere in Etrius’ eyes.

Jervais became an important asset to the Conspirator faction within House Tremere, dedicated to convert as much magi as possible into the new Clan. To this end, he traveled extensively, doling out quantities of vis to other magi and earning their trust in order to find those most valuable for the Tremere cause, while centering on those that would prove useful for the plans of his sire and grandsire.

In 1211, as the Massassa War had begun and the mages had learned of the vampiric threat within their midst, Jervais attention turned to integrating the Tremere further into Cainite society. To this end, he visited several Courts and sought to make alliances that would benefit House and Clan. As a result, he was present in Magdeburg during Prince Jürgen's alliance with the envoy from the Toreador from the Courts of Love. Jervais sought to undermine this alliance by forging the token of friendship between both courts, a blade made of Damascene steel, and exchanging the swords through a Caitiff lackey and hiding it in a Ravnos caravan, through promises of teaching the wretch Thaumaturgy. In addition, Jervais had procured an ally among the Toreador delegation, a vampire named Lucien who forged the false sword in the first place. When the conspiracy was detected thanks to a coterie of vampires present at Jürgen's Court, Jervais' childer Alexia took the fall for her sire, claiming that the deed was her plan.

In 1227, Jervais returned to Magdeburg, where he once again met Jürgen and the former envoy of the Courts of Love from years before, Rosamund d'Islington, this time in the retinue of the banished prince of Paris, the Ventrue methuselah Alexander. In order to win her trust and forgiveness for his earlier involvement, Jervais provided Rosamund with an enchanted coin to save her from a full blood bond to the Methuselah after drinking his blood thrice, but which instead bound the Ventrue to her so that she could command him to accompany Jürgen's army to Livonia, where Alexander would perish in battle against Qarakh.

After this, Jervais traveled along Jürgen's trek, seeking to prove his worth to the Ventrue. In 1232, he was tasked by Etrius to destroy the leader of the native Telyavelic Tremere, an apostate of the clan named Deverra. In a coterie together with his own apprentice Fidus, the alchemist Baghatur Kazharin, the war-wizard Antal Garaboncias, the veteran Miklos, Etrius' agent Torgeir, the gadfly Zabor, and the ambitious apprentice Olena, in addition to two Gargoyles named Rixatrix and Falco, he traveled to Livonia in order to root out the deviant bloodline. This coterie managed to destroy Deverra, albeit with sacrifices, and secured the sacred coal of Telyav, the heart of their power. For his deed, Jervais was granted the right to transfer to any chantry he wished, although he decided to found his own in Magdeburg.

Eventually, Jervais was sent into torpor during the Gargoyle Revolt of 1476 while visiting Ceoris, vanishing from Cainite sight for quite a time. In 1653, he reawakened and, following Malgorzata's disappearance and Goratrix's defection, was forced to make his peace with Etrius. He acted as an agent of the Tremere in the following decades, shadowing figures like France's Cardinal Mazarin.

In 1931, Jervais met destruction at the hand of Spanish Republicans while on a visit there. Rumors are that the attack happened at Goratrix's behest.

Thaumaturgical Countermagic 4, Neptune's Might 3, Path of Blood 3, Path of the Levinbolt 3

Path of the Devil 6 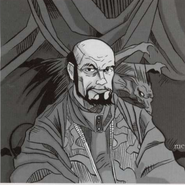 From Dark Ages Clan Novel: Tremere. Art by John Bolton
Add a photo to this gallery

Retrieved from "https://whitewolf.fandom.com/wiki/Jervais?oldid=201683"
Community content is available under CC-BY-SA unless otherwise noted.