Born in Scotland into a clan that had allied with Charles I in the English Civil War, Jeremy MacNeil gained a reputation as a powerful warrior. A traveling Brujah watched his progress and decided to add MacNeil to the ranks of the undead. His Scottish clan rejected him after his Embrace, fearing him as a spawn of the devil. MacNeil traveled the United Kingdom, serving as a mercenary and found himself eventually opposing the British rule over Ireland.

Over the years, he became disillusioned with the hopelessness of the struggle and drifted to France, where he was sheltered by Robin Leeland and his Furores. Jeremy soon became in love with Leeland's latest protégé at the time, a charitable French noblewoman called Marguerite Foccart. Robin blessed their union and the pair returned to Scotland and from there they tried to escape the fighting by traveling to the colonies of the New World, where they hoped to bring Leeland's ideas and promote political freedom among the mortals. They found themselves engulfed in the American War of Independence, however, siding with the colonists.

Marguerite Embraced a childe named Crispus Attucks and left him to be mentored by MacNeil while she returned to France in order to instigate their own revolution with the help of Leeland. Attucks and MacNeil were seen as Leeland's agents seeking to provoke a vampire hunting among the colonists, and were eventually pushed to the margins of vampiric civilization by a Blood Hunt. Attucks remained in the east as a fugitive, but Jeremy traveled to the American Wild West feeding from animals and whatever frontiersman or natives stumbled across his path.

He arrived into the old Spanish holdings of California by the beginning of the 20th century, and laid down roots in Los Angeles in 1943. Because of his reputation, the local Toreador Prince Don Sebastian, wanted him gone as soon as possible. Fortunately for MacNeil, Christopher Houghton (Sebastian's sire) developed an admiration for the Scotsman. As such Christopher would not let Don Sebastian remove him from the city.

A year later, MacNeil petitioned Don Sebastian for an audience and asked for justice on behalf of a group of black and Hispanic Anarchs who had been assaulted by a coterie of violent Toreador for no reason save racial animosity. What happened next would change the course of Anarch history. Don Sebastian had reached his critical point concerning Jeremy MacNeil; while Christopher was in Sacramento, the Don had MacNeil savagely beaten and told him to leave L.A. and never return.

Tales spread by the Anarchs of L.A. say that Don Sebastian mocked MacNeil for his clan, his ancestry, his sect status and his inferior blood before ordering his ghouls to beat MacNeil senseless. All of that is true except for the last part, a lie spread by MacNeil himself to avoid personal embarrassment. In truth, none of Don Sebastian's ghouls laid a finger on MacNeil. None of them could have possibly hurt the powerful Brujah even if they had tried. Instead, Don Sebastian used his crushingly powerful Dominate to force MacNeil to abase himself for the amusement of the Prince and his courtiers and then to bash his own face against the stone floor until it was a bloody mess.

Only then, after MacNeil had nearly beaten himself into torpor, did the Prince's ghouls drag him from the room of jeering Camarilla vampires and deposit him – naked, beaten, and humiliated – in a dumpster behind an abandoned building only minutes before sunrise. MacNeil had just enough strength pull the lid shut himself and then spend the next day covered in stinking filth.

The next night, MacNeil made his way to the haven of his ally, Salvador García (another Brujah and a veteran of the Spanish Civil War), to whom he related only that the Prince had ordered him beaten for challenging the Prince's authority. While Garcia and others immediately demanded retribution, MacNeil, in a supreme act of willpower, suppressed his Brujah nature and counseled patience while they spent the next six weeks preparing the retaliation.

The beating of MacNeil served to solidify the hatred for Don Sebastian and his leadership among the Anarchs, creating an outcry of rage that resulted in the Second Anarch Revolt and the formation of the Anarch Free States (as well as the return of his beloved Marguerite, with whom he shares a blood bond). MacNeil, however, refused any titles, claiming that without artificial laws and hierarchies, a natural resemblance of this would eventually form. He was nonetheless, the new Anarch Baron of L.A.

Over the next 45 years, MacNeil strove to fight off the sects and internal pressures that wanted to unify Los Angeles. The betrayal of Salvador Garcia and the collapse of the Free States following the Kuei-jin invasion after so many decades of staunch resistance came as a terrible surprise to MacNeil. Just as the Scotsman had established a secure front, it was as if his agreements were worthless.

Regardless of his personal power, MacNeil and his small entourage were not enough to stop the storm once it had broken. He, Marguerite, and his loyal supporters fled north to seek refuge in the domain of Sundown, the Prince of San Jose and a long time ally. Since then, MacNeil has been a refugee, hunted by the Camarilla. While most believe he met Final Death (or at least that he has been captured by the Cathayans), he has survived an assassination attempt by parties unknown, and no doubt more are in store.

Jeremy is tall well-built man with pale skin, long brown hair, and green eyes. He typically dresses in the height of fashion. 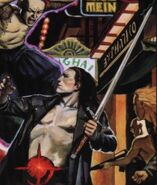 From Nights of Prophecy. Art by Paul Lee

Retrieved from "https://whitewolf.fandom.com/wiki/Jeremy_MacNeil?oldid=277490"
Community content is available under CC-BY-SA unless otherwise noted.