Owner of The Asylum

Jeanette Voerman is a Malkavian with split personality who is acting Baron of Santa Monica, she owns a nightclub called The Asylum with her other personality, Therese.

Jeanette is an extremely friendly Malkavian, loyal to the Anarchs, and she flirts with the main character nearly every chance she gets. Jeanette is an important character during the game time spent in Santa Monica.

Her exact age is unknown, but Jeanette mentioned their last sunrise as being over two lifetimes ago.

Therese states that she and Jeanette did get along at one point, mainly because she did not have many friends due to her father never allowing her out, thinking that she would get hurt in the outside world – as a result, Jeanette was the only one who was there for her and they would create their own fantasy world which they would rule over.

Therese is only other known relation from her time alive was her father, who would molest her when drunk. Therese blames Jeanette for his alcoholism, saying that her bad behavior was tormenting him. Therese simply saw this as her being a good and obedient daughter, and she was convinced her father loved her.

Therese's father died later on. The story differs by sister. Therese says their father killed himself because Jeanette was a bad daughter and tormented their father with her promiscuity. Jeanette says that their father came home drunk one evening and mistook Jeanette for Therese and began molesting her instead. Therese caught them together and in a jealous rage she shot him with one of their father's hunting rifles, "splattering his brains all over the silly clown wallpaper".

The police found out about his death and noticed one of her personalities had killed their father. It is heavily implied Therese was placed in a mental institution, where they briefly suppressed Jeanette from Therese's mind, and she must have remained at the institute until young adulthood. Jeanette mentions an escape, saying the first thing Therese did was find Jeanette. It is likely she is talking about her Embrace by Jacob (who suffers under a similar derangement and relation with his "brother" Esau), which may have brought about Jeanette's return as Malkavian blood is inherently insane.

Therese rose to power in Los Angeles as the Baron of Santa Monica and as a successful businesswoman. Her base of operations and her primary business source was The Asylum, a nightclub in her barony. She ran through finances and business things, while Jeanette lured in patrons for the club.

When the Camarilla became a presence in Santa Monica once again under Prince LaCroix, Therese sought to ally herself with him and the Camarilla. Jeanette favored the Anarchs and was in direct contact with Smiling Jack. It can also be assumed that Therese or Jeanette is responsible for Lily being held prisoner in the blood bank, because the Thin-bloods were forbidden to hunt in the Santa Monica area and Lily was caught stealing from the blood bank and was captured by Vandal Cleaver, Therese's ghoul.

Therese had invested in many new business ventures, one of which Bertram Tung and Therese's sister, Jeanette, ruined for her, causing a feud between her and Tung. Tung was so scared of Jeanette that he went into hiding. Her most promising was the Ocean House Hotel. The Ocean House opened in the early 20th century and was a popular and modern destination for vacationers. However, an insane guest and his family stayed and the man decapitated his wife and children, and one of his children's heads was found in the dryer in the hotel laundry room. The scandal hurt business, and the Ocean House was subsequently abandoned.

Therese decided to invest in the property and set a team of designers and construction workers onto it, however, a ghostly presence haunted the building and scared off all the workers. Therese had very few options left except to follow folklore and superstition. She assigned the protagonist, who had been sent to her by the Prince's ghoul, Mercurio, to retrieve an artifact from the site in order to exorcise the spirit from the hotel.

After retrieving it, the protagonist has two options: give it to Therese and allow her to improve her business, or give it to Jeanette, who will throw it into the Pacific. Either way, Jeanette will manipulate the player into ruining another of Therese's businesses, Gallery Noir, an art gallery in which Therese was to host a charity event for the many influential Santa Monicans. Jeanette persuaded them to slash the painting, which depict Caine, the first vampire, and also to steal money from the charity box. However, Therese had placed a Thaumaturgical enchantment on the paintings, so when they were slashed they summoned the Blood Guardian, a humanoid creature composed of blood with black claws. Jeanette reveals to Therese her trickery, leading Therese to be furious when the protagonist returns to her, but she will calm down once the protagonist gives her the Ocean House Necklace.

Therese tries to finish the protagonist off herself by lying to them, claiming she seeks to reconcile with Jeanette, who is been avoiding Therese after Therese threatened to set Jeanette's prized satin sheets on fire. Therese wanted to meet up with her at The Surfside Diner across the street from The Asylum, but she says she is too busy with the club, and sends the protagonist instead. However, it is a setup and one of the sisters, depending on which one the pendant was given to, has sent a gang of thugs to kill the protagonist. No matter who is on the other end of the phone, a hint is given that Jeanette is in danger.

When the fledgling arrives at The Asylum, it initially appears that Therese is holding a gun to their bathroom door, presumably with Jeanette hiding inside, but when she turns around, one side of her face has its hair tied back and without makeup, like Therese, with the other having one side of its hair in a pigtail and Gothic make up like Jeanette. Therese intends to murder Jeanette.

During the events surrounding the Ankaran Sarcophagus, Jeanette and Therese came to an accord: they'd work together, but maintain the public appearance of near-violent disagreement in order to confound their opponents.

Therese maintained control over Santa Monica's Asylum, briefly rebranding it as "The New Asylum," while Jeanette opened a second location in Hollywood. The popularity of both locations continued to rise, and the Asylum franchise has gone international. 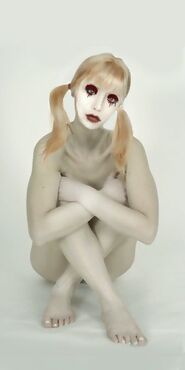 Retrieved from "https://whitewolf.fandom.com/wiki/Jeanette_Voerman?oldid=216095"
Community content is available under CC-BY-SA unless otherwise noted.