Even as a child, Newberry was quite psychotic in a mean and sadistic way. After he put out an eye of another boy with a stick, his wealthy and concerned parents sent him to a mental institution – where he was noticed by the Malkavian Maureen O'Leary, who quickly grew fascinated with his psychotic sadism. After he tortured both his parents during a trip home, she could not resist and gave him the Embrace.

The young neonate was legalized by Lodin after his victory against his rival Maxwell, on account of O'Leary support in the struggle. For the next 120 years, "Son", as he began to call himself, has played his sadistic mind games among mortals. Often these games threatened to breach the Masquerade with their cruelty, such as forcing lovers to drink their partners dry and then using Dominate to prevent them from speaking of it.

Son has been courted by the Sabbat more than once. He has entertained their invitations to join them, although he never made that last step. Using his natural charme among the Kindred, he was able to diablerize a lone Caitiff and longs to reproduce the feat.

His chance came in the War of Chicago, where he kidnapped another Caitiff, granting him "protection", and then began to savor his blood while still letting him live in captivity. If other Kindred would find out about his activities, Son would be in serious trouble.

Newberry killed O'Leary and became Malkavian Primogen of Chicago himself. Durin gattempt of Lasombra to join Chicago Camarilla he was strongly opposite of them and may be was killed. 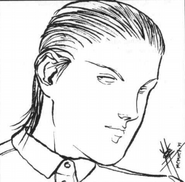 Retrieved from "https://whitewolf.fandom.com/wiki/Jason_Newberry?oldid=243728"
Community content is available under CC-BY-SA unless otherwise noted.