Jalan has never spoken of him (her, it, them) and none dare ask

Third Seraph of the Black Hand

Jalan-Aajav, known as Aajav-Khan to his subordinates, is the third Seraph of the Black Hand and one of the most feared warriors within the Sabbat. He is a notorious diablerist.

Jalan was rumored to have grown up in Mongolia during the time of Genghis Khan. Suffering through a difficult life with many challenges, he eventually rose as the champion of the great Khan himself. He became a great warlord and ravaged countless peoples and nations. Some even claim that not even the Embrace could break his resolve to serve his Khan and that he continued to ride in his name. Temujin's general himself disappeared from historical view not long thereafter, though. He, however, resurfaced in the late 15th century, and witnessed the raid of Lugoj against Byelobog and learned of the Vaulderie and the terrors of the Antediluvians. Deeply moved, Jalan-Aajav pledged himself to the Black Hand, dedicating himself to destroy the elders.

He joined the Anarch Revolt in their battle against the Antediluvians and, later, the Sabbat. Jalan is perfectly suited to the Sabbat ideals of unified force and survival of the fittest; his soul bears the heavy black veins of countless consumed lessers. He guided the Black Hand with his brother Seraphim, leading the sect in times of open Jyhad with a recklessness and savagery that inspires fear and mistrust in enemies and allies alike. He backed Melinda Galbraith's rise to Regency and continues to be her greatest supporter.

Currently, Jalan-Aajav maintains a loosely structured base of operations in Juarez – a network of safe houses, former resistance tunnels, and underworld ties supplied and maintained (albeit reluctantly) by Regent Galbraith herself. He stands out, however, through periods of absence which he claims are hunting expeditions.

After the disappearance of Djuhah and Izhim ur-Baal following the collapse of Enoch, Jalan-Aajav is the sole remaining Seraph of the Black Hand doing his duty with the sect (as Elimelech is too insane to predict) and the only one that is said who never had ties with the True Black Hand. Furthermore, he has dedicated himself on purging remaining branches of the Tal'Mahe'Ra from the ranks of his sect with the aid of a former chatterling named Kazimir Savostin.

It is strongly implied that Jalan-Aajav was known as Qarakh in the Dark Ages. Both characters are elder Gangrel who rode with the Mongols, both share a similar temperament, and Qarakh's sire (especially post-diablerie) may have provided the inspiration for the name Jalan-Aajav.

One common theory holds that Jalan-Aajav and Karsh, (his counterpart in the Camarilla), are actually different identities used by the same individual, who was originally known as Qarakh during the Dark Ages. Jalan-Aajav and Karsh have identical game statistics in their respective profiles in the book Children of the Night. If this theory is true, then Karsh's origin among the Janissaries must be a cover identity, as the origins of both Qarakh and Jalan-Aajav are verifiably dated centuries earlier, to the time of the Mongols' invasion of Europe. It is possible that "Hassan al-Samhir" existed, and that his identity was usurped by Qarakh through subterfuge or diablerie.

Another theory holds that both Karsh and Jalan-Aajav could be the product of a fourth Generation Gangrel methuselah with access to the 9 dot Protean power known as Dual form, which allows a vampire to physically split into two semi-independent bodies.

Jalan-Aajav, Seraph of the Black Hand

Path of the Feral Heart 6 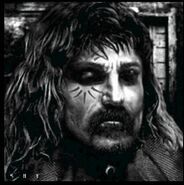 Jalan-Aajav VTES card. Art by James Stowe
Add a photo to this gallery

Retrieved from "https://whitewolf.fandom.com/wiki/Jalan-Aajav?oldid=213897"
Community content is available under CC-BY-SA unless otherwise noted.