Jacob the Glitch was an amnesic Tremere antitribu of Montréal, where he was a member of the Librarians coven. He is a small, mousy Afro-Caribbean in disheveled clothes who always looked confused and befuddled.

Jacob was a pawn under the control of the demon Metathiax, being used as a sensory conduit to spy on the vampires of Montréal. Wiping Jacob's memory to prevent him from learning about his past, Metathiax released him into the city and cursed him with monthly episodes of complete amnesia, preventing him from ever advancing to a point where he could break free from the demon's control.

Unknown to Metathiax was that the connection worked in reverse; Jacob became aware of the subconscious fears of his demon master. Jacob retained his memories for a single month before they would vanish, and he would awaken the next night rambling in English, Greek, Russian, Latin, and a multitude of other languages known to Metathiax.

For the most part Jacob was unintelligible, but there were moments of divine lucidity when he spouted off riddles, fragments of information, and knowledge about Metathiax's fears. The only thing Jacob could remember were potent Thaumaturgical rituals that no one could account for.

In 1998, Jacob, known for his amnesia and incoherent ramblings, became strangely lucid. He spent most of his time conferring with Noddist scholars and rumors said that he even offered to teach Thaumaturgy to anyone willing to listen to his incessant babbling. Then early one morning he met with his clanmate Yasmin the Black and simply said "And so it is" and walked into the dawn sunlight. Some took this as a sign that Gehenna was coming, and the Tremere antitribu of Montréal packed up and left.

(The Path varies each month) 5 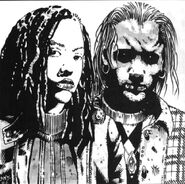 Marie-Ange and Jacob, from Montreal by Night. Art by Christopher Shy

Jacob, The Glitch VTES card. Art by Thomas Denmark
Add a photo to this gallery

Retrieved from "https://whitewolf.fandom.com/wiki/Jacob_the_Glitch?oldid=220723"
Community content is available under CC-BY-SA unless otherwise noted.