Jacob, sometimes known as Esau, is an insane but quite powerful 5th-generation Malkavian of Milwaukee, Wisconsin.

Jacob (obviously not his original name) is a distinguished looking gentleman that seems almost harmless to people who first met him. Enslaved by Arabs while a teenager, he grew up in Muslim lands, where he learned his only dignity could come from his appearance.

In modern nights, he spends most of his unlife in a house on the border of the Kindred-dominated region in the suburb of Greensdale, Wisconsin. His madness subtly but undeniably permeates his domain. As a childe of Abd ar-Rahman, he has a Middle Eastern look and actually thinks he is both the biblical Jacob as well as his brother and archenemy, Esau; both are personalities he created when he was Embraced. The two have waged a war lasting at least a thousand years, unaware that one is a personality of the other. Jacob/Esau denies the Jyhad's existence to stress the profanity of undead existence.

Milwaukee by Night has listed Jacob's childe (Jason) as a member of the 7th generation. But, since Jacob himself is described as a 5th generation vampire, that would mean that Jacob has committed diablerie after Jason's Embrace, thus lowering his own generation at some point after the year of 1903. This information is contradicted by the Encyclopaedia Vampirica, that says Jason is actually a 6th generation vampire. It should be noted, however, that Encyclopaedia Vampirica is a book written in character, and has been widely known as an unreliable source of information. But then again, there's also the possibility that the authors of Milwaukee by Night have simply made a mistake regarding Jason's generation, and that Encyclopaedia Vampirica has corrected that mistake.

Jacob (Esau), My Brother, My Enemy, Myself 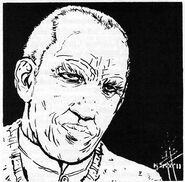 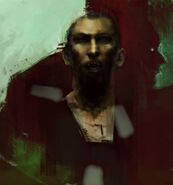 Esau VTES card. Art by Lawrence Snelly
Add a photo to this gallery

Retrieved from "https://whitewolf.fandom.com/wiki/Jacob_(Malkavian)?oldid=241635"
Community content is available under CC-BY-SA unless otherwise noted.