Lord Jürgen von Verden was a sixth-generation Ventrue Scion and signature character of his clan during the Dark Ages. His sire, the Ventrue Lord Hardestadt, appointed Jürgen as his vassal prince in Magdeburg.

During the Dark Medieval era, Jürgen acted as his sire's right hand throughout the Holy Roman Empire and eastern Europe. Jürgen maintained a shadow order of knights within the mortal swordbrethren the Knights of the Black Cross, a knightly order of Cainites and ghouls led by Jürgen's loyal retainer, Lucretia von Hardtz. His circle of advisers, the Primogeniture Assembly, inspired what would become the primogen in modern Kindred cities.

As the War of Princes broke out, Jürgen represented his sire's interests in Hungary and Livonia, where he came into conflict with the Tzimisce voivode Vladimir Rustovich and the Gangrel warlord Qarakh, respectively. After he negotiated a tentative peace accord with Qarakh against Rustovitch, Jürgen was allowed to marry his beloved, the Toreador Scion Rosamund of Islington.

In the end, Jürgen's secrets were carried to his sire by the Caitiff spy named Albin, and Jürgen was destroyed for his failures by Hardestadt in 1271. It is unclear, though, whether this was for his political failures, for his lapses from the Road of Kings, or for some other reason.

One popular theory among fans is that the elder known as "Hardestadt the Younger" is in fact Jürgen, having faked his own Final Death and created a new identity for himself out of necessity. Consider this: a blond, militant Ventrue of the Sixth Generation, with a feeding obsession revolving around soldiers, possessed of a visionary mindset, an autocratic bearing, and a hidden drive for personal survival. Are we speaking of Lord Jürgen von Verden, or Hardestadt the Younger? While Lord Jürgen supposedly met Final Death, Hardestadt the Elder refusing to toss away the blood of his failure of a childe, and instead ordering (or Dominating) the wayward ancilla into assuming an alternate identity is totally within character. While this has deep implications for any characters who survive from the Dark Ages to modern nights (or poor Jan Pieterzoon, who suffers under the same fate as his potential sire, as Beckett discovers), it ultimately matters little for those vampires who stick to one timeline or the other. The truth of the matter died when Hardestadt fell to Tyler’s fangs — while it greatly enhances the irony if his broken puppet realizes Hardestadt’s Dream, the Camarilla won’t fall because of it.[1] 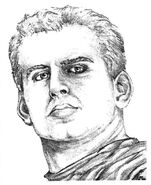 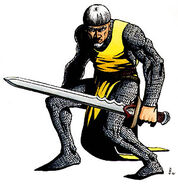 From Dark Ages Clan Novel: Ventrue. Art by John Bolton
Add a photo to this gallery

Retrieved from "https://whitewolf.fandom.com/wiki/J%C3%BCrgen?oldid=258341"
Community content is available under CC-BY-SA unless otherwise noted.