Isouda de Blaise was the Cainite Queen of Anjou, Chartres, and Blois during the Dark Ages in the Courts of Love. She later joined the Sabbat.

The Court of Love presided over by Isouda was smaller than those of Aquitaine and Flanders, but by its workings the participants have come to have far more influence than many would suspect. Young Ventrue would pay not only in gold but in his master's good will for a place at Isouda's court.

Isouda herself was described as elegant in manner and wise in the ways of the Cainite heart and mind. She was also fascinated by stained glass and architecture in general, and sponsored the construction of the Cathedral of Chartres from its early days. Cainites with skills in sculpture, painting and metallurgy had an easier time finding favor in her courts. 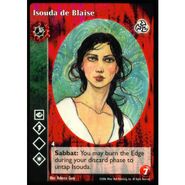