Isaiah Morningkill was a homid Silver Fang Theurge who lived in the 19th century United States, and the father of king Jacob Morningkill of the House Wyrmfoe.

In recent years, a nearly forgotten figure from Silver Fang history has become one of the most celebrated werewolves in the history of House Wyrmfoe, not least for the parallels with his great-grandson Jonas Albrecht’s own life. The revelation of his tale has at last given the New World Silver Fangs a hero to rival those of the Old World.

A century before Albrecht was banished by Jacob Morningkill, Isaiah was banished from the same protectorate as the result of a disagreement with the sept’s Caern Warder and some particularly nasty political maneuverings. Unlike Albrecht, he never returned. Morningkill was respected for his wisdom, his skill with spirits, and his unusual ferocity in battle for a Theurge. Unfortunately, none of this was enough to save him from the petty politics of the day. After bidding a sorrowful farewell to his wife, he headed to the frontier.

In the Old West, legends were made. Being a Theurge, Morningkill was drawn by the terrible disruption that was tearing through the local Penumbra. He, along with a collection of Theurges from other tribes, eventually realized what was causing the problem: a mighty Wyrm spirit called the Storm Eater. Morningkill took initiative to contact Theurges in the so-called Pure Tribes, and he was instrumental in organizing all the tribes, both Pure and Wyrmcomer, against the spirit.

In those days, Morningkill became everything a Silver Fang leader should be: strong, focused, and committed to the cause. Taciturn to the point of terseness, he sometimes traveled alone, although other times he traveled with a pack. When he visited a Sept, its members would be changed by his passage. Morningkill’s key attribute, though, was the ability to admit to the mistakes the European Tribes had made in the once Pure Lands.

When a mighty Silver Fang lord was prepared to admit error first, it came more easily to the other tribes. In the end, Morningkill sacrificed himself for his tribe, for the West, and for Gaia. When it became clear that one member of each tribe would have to die to defeat the Storm Eater, Morningkill knew he couldn’t ask others to make a sacrifice he wasn’t prepared to make himself. As the climax of the Rite of Still Skies, Morningkill died alongside 12 other brave Garou from the other tribes.

With Morningkill dead, the willingness of the European tribes to admit their mistakes faded. The story of his sacrifice was entrusted to only a few Galliards and passed from the common knowledge of most Silver Fangs. All that changed with the ascent of his descendent Jonas Albrecht to the throne of House Wyrmfoe. The work of the new king and his packmate Evan Heals-The-Past to reconcile the tribes in North America has been bolstered by the tales of heroes like Morningkill who were admitting their mistakes and working for the good of all over a century before. 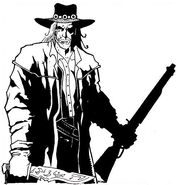 Isaiah Morningkill, as depicted in Tb-SF (1st Ed)
Add a photo to this gallery

Retrieved from "https://whitewolf.fandom.com/wiki/Isaiah_Morningkill?oldid=236302"
Community content is available under CC-BY-SA unless otherwise noted.