Irad, "The Strong", was a Second Generation vampire who was the second childe to be Embraced by Caine.

Caine Embraced Irad at the insistence of Enoch, who desired Kindred brethren.[6]

Irad's strength served as Caine's arm,[6] who would have childer possessing leadership and dominance. The Disciplines of Dominate, Presence, Potence, and Fortitude are common among the Ventrue (VTM), Brujah, Cappadocian, and Lasombra Clans.

Thus, the aptitude of leadership would be passed to the childer thought to be the Ventrue, Brujah, Lasombra, and Cappadocian Antediluvians. These would serve well to be the "Philosopher-Kingship Lineage".

Cults of the Blood Gods revealed Servitors of Irad. According to Noddist history, Irad was the most bloodthirsty warmonger of his time, his prowess on the battlefield and in commanding men earning the respect of the first murderer, and Caine’s Embrace. Irad joined the ranks of the Second Generation and led Caine’s armies for an unrecorded number of centuries, always loyal to his sire and kin, as long as the battlefield could slake his unquenchable thirst. Something changed in Irad when the Antediluvians rebelled against the Second Generation, however, with the handful of accounts from vampires who claim to remember the war agreeing Irad turned his armies to oppose Enoch, Zillah, and a controversially vague number of other Second Generation vampires.

His motives for doing so are unclear to this night, though some posit he felt the Third Generation could bring him the blood he so craved in greater quantities than his sire and siblings, while others believe Caine snubbed him as nothing more than a killer, goading Irad into showing him what a killer he could be. Whatever the case, Irad wasn’t exempt from the Third Generation’s attack on the Second, though some believe he fell last, his denouement coming as a surprise after everything he’d sacrificed for them. The cult that emerged in the millennia that followed openly claims to serve the will of Antediluvians, which strikes Cainite scholars as odd, given their epithet as “Servitors of Irad.” The cultists respond that Irad is emblematic of all blood shed in glorious battle, crimes of passion, and subtle assassinations. The individual matters less than their service to the true warmongers — the Antediluvians — and just as Irad served them to drench the planet in blood, the Servitors shall do the same.

The Servitors of Irad have ever waxed and waned in power and popularity, drawing Kindred who see themselves as divine killers or who lack purpose beyond destruction. During times of great war between the kine, the Servitors emerge to ride the tide of battle and drive increasing numbers of mortals into the jaws of death. During times of peace, they attempt to provoke war or needle vampires into territorial disputes, sectarian conflicts, or religious crusades. They are ever on the lookout for the grandest buffet, which inevitably follows chaos and battle. The Gehenna Crusade has revitalized the Servitors of Irad, who join the fight from every conceivable position, whether as manipulators pushing political buttons or as warriors in the field. The more philosophical branch of the cult wishes to consume a host of methuselahs while summoning their Antediluvian masters. The more politically motivated Servitors want to deal a grievous blow to the Sabbat, who they feel are still rank amateurs at war when compared to the clan founders. For obvious reasons, Servitors of Irad rarely declare their presence or openly recruit in peaceful domains, though with the Sabbat’s absence in many of its former domains, they look to propel the Camarilla and Anarchs into a fresh conflict absent for so many centuries. 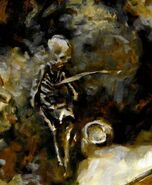 Image from the Loresheet "Servitor of Irad"