Action, Beat-'Em-Up
Hunter: The Reckoning is a console game based on the World of Darkness game of the same name. It was released in 2002 for the Xbox on May 21, and for the GameCube on November 18.

You have been chosen to join the reckoning - to step in the World of Darkness where humanity is ravaged by vampires and marauding monsters. As a Hunter, you are immune to this beasts' illusions, but with your power comes a daunting destiny: to destroy these evil beings before mankind is massacred. Prey for your life.

The story follows four Imbued - Father Esteban Cortez (a Judge), biker Spenser "Deuce" Wyatt (an Avenger), cop Samantha Alexander (a Defender) and clubber Kassandra Cheyung (a Martyr) - as they struggle to cleanse the community of Ashcroft of the undead. Originally unleashed by the fury of a prisoner who was being executed in Ashcroft Penitentiary, the four Hunters thought they had defeated them once before - but now they are free again. 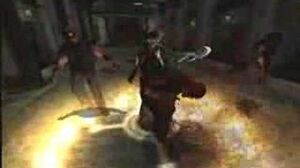 Hunter The Reckoning
Promo trailer
Add a photo to this gallery

This Hunter: The Reckoning-related article is a stub. You can help WWWiki by fixing it.
Retrieved from "https://whitewolf.fandom.com/wiki/Hunter:_The_Reckoning_(console_game)?oldid=245128"
Community content is available under CC-BY-SA unless otherwise noted.