Hunedoara is a dark medieval castle hidden high in the Southern Carpathians mountains of Eastern Romania, forbidding and desolate in its fading grandeur. It serves as the haven of the Inconnu's Inner Circle.

The castle was once the haven of Tzimisce Voivodes such as Damek Ruthven, and once even contained a manifestation of the Tzimisce Antediluvian. However, at some point Damek was slain by his Tzimisce enemies, and his childe Danika inherited some of his holdings, including Hunedoara.

As Danika Ruthven was a member of the Inconnu, Hunedoara Castle became a key location of the sect. When the Inconnu adopted the policy of removing themselves from Kindred politics, the castle became a comfortable resting place, hidden deep in the Carpathians.

Shortly after the Anarch Revolt, when the fear of diablerie and Final Death swept through the ranks of Inconnu society, the Council of Twelve gathered in Hunedoara and initiated a dark, magical ritual, in which they summoned a demonic being called Nikanuuranu. In exchange for a sacrifice in blood, Nikanuuranu created a barrier that shielded Hunedoara from worldly incursions.

Location in the Carpathian Mountains 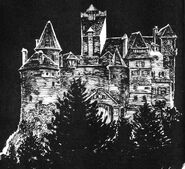 Retrieved from "https://whitewolf.fandom.com/wiki/Hunedoara_Castle?oldid=195428"
Community content is available under CC-BY-SA unless otherwise noted.