watch 02:48
Wiki Targeted (Games)
Do you like this video?
Play Sound 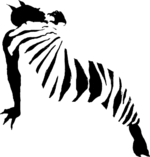 The Howl of the Devil Tiger is one of the acknowledged Kuei-jin Dharmas of the P'o.

With rods do the farmers drive the bullocks,

You are the rod and the farmer and the ax and the fire.

Fine skin-lanterns shall be your sunlight

And corpse-dust shall be your perfume.

- The Songs of Hell

The Howl of the Devil-Tiger

Some souls scream when they reach Yomi. Others enjoy the trip and bring the torment back with them when they return. To these souls, the Howl of the Devil-Tiger is a mantra of hope. Pain is a cleansing thing to these vampires; it roots out imperfections and applies the healing torch. In the shriek that follows, a higher Truth appears.

According to The Blood Sutras, Xue discovered the Mantra of Pain after the destruction of Mount Meru. Weeping, he lashed himself with nettles and tore gashes in his sides. As his blood poured to the ground, it burst into flames. Xue ripped off his own face and threw it into the flames. It was then he became enlightened.

Despite misconceptions, the followers of this path are not demon-worshippers. Oh, they appear to be, to the unenlightened observer: Devil-Tiger temples crawl with atrocities - from skewered babies to maimed slaves - and ring with obscene chants and discordant music. Unclean spirits frequent such places, and the Chi that boils in Devil-Tiger dragon nests is corrosive and foul. The outsiders miss the point, however: Devil-Tigers do not worship devils, they want to become devils. And that is a far greater purpose than servitude.

To the Searing Wind (another name for the Devil-Tiger sect), pain is instructive and purifying. A devil, in the grand scheme of things, is the doctor with a cauter-knife and bone-saw. By cutting off the rotting limbs and burning out infections, a devil makes creation health. It is Heaven's wish that Devil-Tigers fulfill this task on Earth - both on others and upon themselves.

These vampires epitomize sadomasochism; they enjoy tormenting other creatures mentally, emotionally and physically, but revel in the same treatment, too. Each tear is a new lesson, each cry a vision of truth. Just as a sudden flash of light leaves a deeper darkness, so the lash of pain creates a greater calm. Restraint comes from the fear of pain; hence, welcome pain and banish restraint. Agony should be savored for the insights that it brings - insights that turn to higher joys, if you understand their meaning.

The Searing Wind tries to help other find those joys; paradoxically, it also seeks to destroy people who understand the truth too well. These devils are surgeons too, after all, and destined by Heaven to cauterize disease. Like the goddess Tien Mu, Devil-Tigers are the lightning that illuminates the wicked; like Le Kung, they are the thunderbolt, which strikes down sinners. The Sixth Age, so they say, will be the brightest strike, the flash that will burn a wicked creation to ashes. Like the lightning, the Devil-Tigers will fade when their task is done, and a new, wiser creation will rise from the embers of the old.

Alongside the Cranes, the Howl of the Devil Tiger is one of the most rigid structured Dharmas. Their temperament, however, makes it on of the most conflict-driven bodies within Kuei-jin society, with heavy infighting over each position of authority and internal decision, so that it has been referred to as the Ten Thousand Razor Splinters by a bodhisattva.

Like tigers, the vampires of the Searing Wind prefer magnificence to brutality. Such evil has a grace and power that simple carnage cannot match. Their lessons cut like razors - literally! - and their mantras flay one's ears. Skill is a virtue, brutishness a waste. A Master abducts her future disciples, imposes horrific lessons on them, then has them meditate on the essence of their pain.

The students themselves come from violent backgrounds. In their lives, they learned to live with pain. In time, they drew strength from it and often died gruesome deaths. During their stay in Yomi, these souls had their weaknesses sliced away. Now, with the Second Breath in their lungs, they strive to continue their training and to pass on the lesson to individuals who might appreciate it.

Modern Devil-Tigers find the world a fascinating playground. Never before has pain been so acceptable, so mass-produced. At the same time, many people seem numb to exquisite anguish. The challenge of the modern world is to make it feel again - to apply the hot iron until creation's eyes fly open and behold the sight of Heaven.

Even the wisest Devil-Tigers seem impulsive, a bit too quick to provoke a scream. The younger ones are clumsy tempters or raging killers, and their elders aren't much better. Subtlety is not this Dharma's strong point. In the dawning of the Sixth Age, Devil-Tigers stand ready to claim the world and are none too humble about that privilege. They cultivate Bane-spirits in their gardens, but cannot quite hide the hunger in their eyes.

Auspicious Omens and Symbols for Devil-Tigers

Important signs to watch for and to keep around. Many followers of this Way integrate these symbols into their homes and temples. Bodhisattvas frequently manifest such phenomena whenever they appear. The following are Auspicious Omens and Symbols for Devil-Tigers: Tigers, thunderstorms, lightning strikes, huge fires, and burning lotuses (often represented by floating flower-candles).

The elements connected to the Way. Most followers style their dress, behavior and practices after the elements they revere, and they employ samples of these materials in their meditations and rites. The Affiliations of Devil-Tigers are as follows: Fire, the number 2, the color red and the south direction.

From Dharma Book: Devil-Tigers
Add a photo to this gallery

Retrieved from "https://whitewolf.fandom.com/wiki/Howl_of_the_Devil-Tiger?oldid=266928"
Community content is available under CC-BY-SA unless otherwise noted.