Horatio Ballard is one of the childer of Lodin, former prince of Chicago, who once sought to attain princedom himself following Lodin's Final Death during the War of Chicago of 1993.

Horatio Ballard was born as a son of an Albany businessman and legislator. He moved to Chicago during the Civil War to join his uncle who was selling meat to the Union army. The years following the Civil War were known as the "Gilded Age" and were boom times for America's industrial barons. The age included the rise of Rockefellers and Vanderbilts, all who were poised to milk the government for money while the nation was being rebuilt. None of Chicago's financial cutthroats could compare to Ballard in pure ruthlessness and guile, however, qualities that were matched only by his appetite for huge quantities of gourmet food.

When his uncle died during the Great Chicago Fire, he became the sole owner of one of Chicago's largest construction companies and one of its most influential citizens. Rebuilding of Chicago after the fire made him richer still, and his investments spanned the entire financial structure of United States. His only interests besides money seemed to be the incredible banquets he organized for himself.

Then he suffered his first heart attack. Now acutely aware of his own mortality, he started spending huge sums of money in legitimate medical research. After the second heart attack, he started showering money on any quack who could promise him any kind of hope for continued life. Then a weird little man came to him with tales about immortal vampires. Ballard came more intrigued when this man showed him a staked immobile corpse with rock-hard skin, claiming to have found it on a rooftop. Ballard bought the corpse, and then accompanied by armed guards whose silence he could buy, he removed the stake. The pitiful creature could barely move or speak, but it told him about vampires in exchange for a little blood. The creature told how a vampire called Lodin had just become prince of the city, and left him staked on a rooftop for his support of the previous prince.

Leaving his prisoner staked again, Ballard then sought out this "Lodin", and with the help of his considerable resources, quickly located him. When Lodin awoke from his daysleep in his haven, he found the room full of armed guards and Ballard holding a wooden stake over his heart. Ballard told the prince that his only hope was cooperation. Laughing, Lodin threw Ballard's massively obese body across the room and dispatched all of the guards in a flash of violence. Despite several guns and shotguns being fired, Lodin appeared completely unharmed. Ballard broke down and started begging for mercy, crying that he would give Lodin money, blood, power, anything for his life. Lodin considered for a moment and then decided that the man's resources could prove useful. And so Lodin Embraced Ballard (using the man's wrist since his neck was nowhere to be found).

Ballard is a business shark of the highest order who controls most of Chicago's white collar businesses, its industry, and has considerable influence on its law firms and bankers. Ballard's Ventrue feeding restriction is that he can only feed on the members of his own family.

Over the next years, Ballard served Lodin well as a lieutenant, mostly out of fear. He would provide money whenever the prince needed it, no matter how large a sum. As time went by, Ballard became increasingly good at his job, and his influence grew.

However, when Modius rose to challenge Lodin out of Gary, Indiana, Ballard realized the prince had become afraid. Soon Ballard came also to realize that it was only his money and influence that kept the Anarchs from taking over the city. This improved Ballard's confidence greatly and he started planning to replace Lodin as the prince of Chicago.

Following Lodin's Final Death in 1993 during the War of Chicago, this goal is closer than ever, but Ballard has several competitors for the spot. One of the strongest ones is Capone.

Ballard eventually backed down from his plans to become Prince when it became apparent that the Primogen would not back him. Instead, he turned back to his business affairs, using it to insulate himself from harmful interference from outside of the Camarilla. In the end, he supported Kevin Jackson in his claim of praxis. To their mutual benefit, Jackson did not excessively avail himself of Ballard's mortal influence.

While Ballard's business did not suffer in the global financial crisis of 2008, Ballard's personal net worth did, causing severe damage to his reputation as a business mastermind.

Must feed from members of the Ballard family 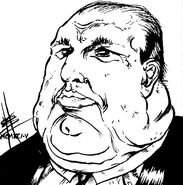 Retrieved from "https://whitewolf.fandom.com/wiki/Horatio_Ballard?oldid=240670"
Community content is available under CC-BY-SA unless otherwise noted.