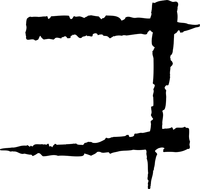 Homid is a form that Garou and fera can shape-shift into in which they resembled human beings, able to mimic human characteristics, and utilize abilities only possessed by human beings, regardless of the Shapeshifter natural form, determined by his/her Breed.

Essentially a human being, the Homid form allows Garou to move through man’s world more or less unseen. Metis and lupus Garou still possess their regenerative abilities and their vulnerability to silver in this form, while homid Garou do not; for them, silver feels uncomfortable, and wounds heal with surprising quickness, but the obviously uncanny effects remain absent. Aside from possible scars or body art, a Homid form werewolf appears to be a typical person. Even so, this thin disguise still betrays the predatory Beast underneath if you dare to look close enough.

While in Homid form, Shapechangers lacked much of their metaphysical abilities as well as weaknesses. Garou in Homid generally cannot rely on their rapid self-regenerative abilities as readily but they also aren't as hindered by silver as they are in other forms.

This form is to be distinguished apart from the Homid breed, whose primary form is a Homid as they were born from one or more human parents but with Garou or fera Shapechangers in their genome.

The Homid form of the Ananasi is different from that of other shapeshifters.

Retrieved from "https://whitewolf.fandom.com/wiki/Homid_(form)?oldid=187322"
Community content is available under CC-BY-SA unless otherwise noted.