Hesha Ruhadze is the signature character of the Followers of Set in Vampire: The Masquerade.

He was known as Ruhadze when he was mortal, then became Hesha after his Embrace in the midnight shadows of a Nubian gold mine. The harsh Nubian climate and Ruhadze's poverty tempered him at a very young age. To avoid conflict, he and his family adopted whatever religion had grown to prominence at any given time: Islam, Christianity, and even animism at certain points. By the time he had reached a relatively advanced age for Nubians, his 30s, Hesha had fallen in with a cult that had gained no small bit of notoriety. This was a blood cult, a herd of mortals tricked into believing in the divinity of their Kindred patron. The cult's Setite leader Embraced Hesha, seeing in the man a cleverness and intellect that he thought would serve him well in his quest to reincarnate his dead god. Hesha's sire grew so proud of his childe in the modern nights that he renamed himself Abu Ruhadze in the Islamic tradition: "the father of Ruhadze".

After his Embrace, Hesha acclimated quite well to the Cainite condition. His newfound toughness was a great boon during the long nights he spent uncovering the hidden lore of Kindred and other chthonic creatures. Mentored at first by his sire, Hesha felt the calling of his clan's legacy. Abu Ruhadze knew he had chosen wisely, and instructed his childe in the ways of the Path of Typhon. His progeny proved once again to be a fervent pupil. To this night, Hesha's clanmates consider him a near paragon of the Theophidians, revered for his devotion to the god of the Underworld and his spiritual wisdom.

Hesha's undead travels took him everywhere, and he met a great many prominent Kindred. He has crossed paths with the Kindred archaeologist Beckett no few times, and the two consider themselves cordial rivals. Additionally, his zeal to uncover the next secret or hidden revelation earns him great status among members of his clan; he is glad to dive into forgotten tombs as long as he believes they offer something of worth.

In modern nights Hesha continues his tireless quest for knowledge. He has established numerous havens and at least one secondary identity to help him in the trade of cryptic lore. Those who know him also know that he is willing to share almost any secret he unearths, for the right price. 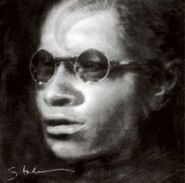 From Clanbook: Followers of Set Revised. Art by Christopher Shy 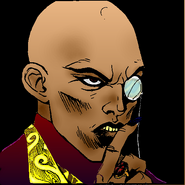 From the Gehenna sourcebook 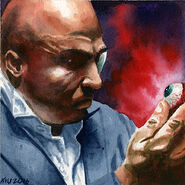 Retrieved from "https://whitewolf.fandom.com/wiki/Hesha_Ruhadze?oldid=258738"
Community content is available under CC-BY-SA unless otherwise noted.