The Eaters of Sin, Sunu (endonym)
Hem-Ka Sobk is a Craft of Egyptian sinners turned community-focused assassins in service to Sobk, a crocodile deity. In ancient times, when the Mokolé existed openly among humans, they were worshiped by these cultists.

Sobk appears to have been a crocodile pre-pharaonic deity worshiped by various tribes around the Lake Faiyum (the ancient Lake Moeris) and the interior of Kom Ombo. It was revered as a "Judge of the Dead" and an "Opener of the Ways".

Living is a matter of survival, not lust. When the Sunu begins his hunt, it becomes detached and unemotional, the living embodiment of the patient crocodile waiting for its prey. It is no longer serving the human god, but a living manifestation of the god himself.

The Hem-Ka Sobk believe that when Sobk's worship was widespread, he granted his faithful shards of his own Sekhem (the power that fuels magic, or in this case his Avatar). As his worship declined, the Sekhem he gave to others was lost, being born into those who never Awakened or who turned away from his gift. It is the duty of the Sunu to find those who contain one of Sobk's shards and judge them. If the person is found worthy, she is either offered the chance to join the Hem-Ka or left ignorant and allowed to go her way (these mages are referred to as Xepher). The Sunu hunt and kill those they find unworthy. They then devour the person's liver (to prevent him from ever being reborn, they say) and return the heart to Sobk so the god may regain his lost Sekhem.

The Hem-Ka do not believe that Heka, the power to do magic, is something inherent. Their powers come from Sobek and their expression of Heka is entirely based around different foci. The Heka is an act of devotion and service to a greater god, is not the same.

The Hem-Ka Sobk mainly focus on the Sphere of Correspondence and Spirit. They are forbidden to learn the arts of Entropy, Forces, and Prime.

Originating in the region of Faiyum, the original Hem-Ka were known as the Heri-Shi, who worshipped a crocodile god known simply as the Rager. When the worship of other gods rose, the Heri-Shi were sidelined, their god relegated to a minor role within the greater pantheon, and their marshes drained to make room for agriculture. Renaming themselves Hem-Ka Sobk, they left Faiyum and dispersed in the cities, worshipping the true form of the Rager in secret.

As a result, they did not heed the call to the Great Convocation, although their entertained friendly relations with the Ahl-i-Batini, with whom they shared insights into Bakhu (what the Batini referred to as Mount Qaf). This craft existed in the poorest places in Egypt, recruiting among the slum-dwellers and protecting the community. Practicing their religion with possibly delusional fervor, they are insular, xenophobic, and often violent in their approach to others, living a lifestyle that has not changed in hundreds of years.

The Hem-Ka Sobk remained hidden, until the last Kheri-heb-tep and the Sunu were found dead the morning after one of the Hem-Ka Sobk's most important rituals. The bodies were twisted as if the priests had died in intense pain. All were desiccated and covered with hundreds of tiny bite marks. The Kheri heb ashau sealed off the ritual area with magical wards and the scant materials at hand. The next night, the seals were broken. Shortly afterward, the Kheri heb ashau began demanding human sacrifices to satisfy Sobk, and a few claimed the title of Kheri-heb-tep. The Sunu have not re-formed. Some rumor that the Hem-Ka Sobk have fallen to malevolent forces and that they joined with a cult that devours human flesh.

Hem-Ka were divided into two different groups. The first were the priests (half-insiders), the Kheri Heb ashau, who were practitioners of Hedge magic. The second group consisted of those Awakened following Sobk, the Sunu and senior officers of the Hem-Ka Sobk known as Ka-tep Kheri-Heb.

The Hem-Ka appeared to operate in a fairly loosely defined hierarchy that employs men and women. Priests were placed in specific categories, but this is more related to their functions in society as powers they hold.

The Awakened members of the Craft believe that they atone for atrocities that they once committed. Each one dies in his sleep, meets the crocodile god, and is offered the choice between eternal destruction or the chance to atone. Those who wish to atone become the Sunu. As a sign of their repentance, they must remain bald and clean shaven, they cannot marry or have children, and they may wear only what others give to them. They are required to live within the community and serve its needs when not attending to their duties as Sobk's hunters. The Sunu sharpen their teeth and scar themselves ritually. 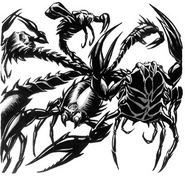