Hellene Panhard is one of the surviving childer of Michaela, and the current Prince of the city of New York.

In life, Hellene was part of a banking family and inherited skill in organizing events. Hellene's Embrace, however, was a hasty affair. Michaela had adopted a Sabbat tactic and often Embraced great numbers of fledglings that were sent as cannon fodder against the enemy. Hellene was one of the few of these Embraces that managed to survive. With her talents, she secured herself a place within the small Camarilla community of New York as a Harpy, orchestrating attacks against Sabbat havens and using intrigue as her main weapon.

Hellene had always a strained relationship to other childer of Michaela and after the Battle of New York, she pledged her allegiance to Calebros. Much of her effort was put into keeping the Kindred of New York unified, but she always secretly sought to assume the princedom that she believed was rightfully hers. Her main selling point was stability: Hellene believed that all Kindred should be allowed to settle in personal domains that could later be regulated by a prince, who should watch that the vampiric population, so that it does not grow out of control.

Around 2005, Calebros stepped down from his role as temporary Prince of the city and Hellene emerged into the political vacuum following his resignation as the sort of compromise candidate, whom no one actively preferred as the new Prince, but whom virtually no one disliked. Besides, as childe of the deceased Prince she shared her prestigious lineage, making her late sire's contacts more inclined to work with her. Hellene's ascension to Princedom was quite successful in providing stability to the Kindred population, and she even managed to get the Anarchs to play ball. 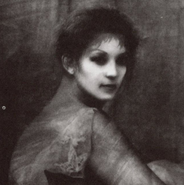 Hellene in New York by Night

Retrieved from "https://whitewolf.fandom.com/wiki/Hellene_Panhard?oldid=229997"
Community content is available under CC-BY-SA unless otherwise noted.