Herself
Helena is an ancient member of the Toreador clan and one of the most powerful active methuselahs in the Modern Nights. Her feud with the Brujah methuselah Menele has reached legendary proportions over the course of the centuries. She used to lie in torpor beneath the Succubus Club in Chicago until she awoke in 1990. She then assumed the guise of Portia, a Toreador neonate and a regular at the Succubus Club, until the War of Chicago destroyed both the club and her pawn, Prince Lodin. Helena's descendants have occupied key positions in Camarilla, like François Villon and Madame Guil, as well as in Sabbat, like Melinda Galbraith.

Even before her Embrace Helena was regarded as the most beautiful woman who had ever lived. She lived in Argos of Mycenaean era as the most beloved daughter of the king, until she met her future husband Minos, who was withered and ugly. Desperate, Helena ran away from her home, taking only a single handmaiden with her. When she had collapsed from exhaustion, she was found by a prince of Asia Minor, Prias, who matched her beauty and the two immediately fell in love. Prias escorted Helena to his city where the couple lived happily for several years.

Their happiness lasted ten years, until Minos found her and revealed himself to be not quite human as he raged through Prias' palace. Minos effortlessly defeated Prias and took Helena with him back to Argos. There he fed from her in a slow and agonizing way to punish her. When Minos finally gave her the Embrace her first meal was to be her own father. At first, she seemed resigned to her fate (fueled by both the Blood Bond and Minos' powerful Domination), but secretly plotted to destroy her hated sire and usurp his heartblood. Her chance came 13 years later, when Prias returned with an army to lay siege to Argos. With the help of his soldiers, Prias managed to pierce Minos' heart with his spear. Eager for her revenge, Helena jumped forward and commited Diablerie on her sire.

At first Helena offered Prias the same eternal youth that she had received from Minos, but Prias refused, terrified at what she had become and the thought of consuming the blood of the living. Then Helena told him how mortals could achieve immortality also by drinking vampiric blood, without being turned vampire themselves. This offer Prias accepted. Helena gave him her blood, making him into her Ghoul and the two continued to live happily together, eventually venturing off to the splendid new city of Carthage in the south.

The Betrayal of Carthage

When the Punic Wars began, Helena and Prias fought for Carthage at first, but soon Helena realized that the struggle was futile. The Romans, who were supported by Ventrue methuselahs, could not be defeated. So Helena traded her and Prias safety for important details about Carthage's defenses and the two left the city before the fatal final siege that laid waste to the city. For her help, the Ventrue rewarded Helena with the fiefdom of Pompeii. Unfortunately a survivor, the philosopher warrior Menele, found out about her treachery and swore vengeance for his slaughtered friends and the shattered dream of unity between Kindred and kine.

Menele traveled to Pompeii and used his knowledge of blood magic to conjure a great spirit of fire to destroy the city. Unfortunately he lost control over the spirit and had to flee. Prias and Helena managed to escape as well, traveling to Egypt. Helena realized Menele would continue to pursue her so her only option would be to destroy him first. Thus started the war between the two methuselahs that would last several millennia.

The war raged on for centuries as neither of them could gain the upper hand, until Helena seemingly managed to deal Menele a near-fatal blow in Spain, being driven off by the sun before she could finish him off. But the next day, Menele was nowhere to be found and despite nearly a century of searching that all traces of the Brujah vanished. Helena was faced with a new problem however, as the Thirst of Ages had begun to take its toll on her, denying her sustenance from mortal blood and forcing her to devour her own kind.

Helena noticed with her considerable Auspex power that traces of Menele's aura were found on the other side of the ocean. Fascinated, she helped fund the expedition of Hernán Cortés and followed him over the Atlantic. Helena was accompanied by Prias and a number of her own female progeny intended to provide her sustenance. Helena supported Cortés in his conquest of the Mesoamerican cultures as her search for her nemesis continued. The Aztecs and the Spanish, like so many other cultures before them, had no idea that they were merely pawns in a gigantic game played by the methuselahs.

Menele continued to avoid facing her directly, until in 1820 the two met in a terrible showdown at Fort Dearborn. Helena was supported by Prias while Menele had found an ally in the Sauk chief Black Hawk. After the fight, both methuselahs were grievously wounded and in torpor. Both were saved by their helpers. But even in torpor, the two battled on, using their incredible powers of Auspex, Dominate, and Presence to stir up people and cities against each other. After the American Civil War and the founding of Chicago, Helena focused on gaining footholds in the upper echelons of Kindred society.

Helena rose from torpor in 1990 underneath the Succubus Club. This club, an iconic location known to all of Chicago's kindred, had been intentionally built on top of Helena's resting place. Prias had secretly organised its construction to give her a haven where she could safely feed and learn about the modern world. María, one of Helena's childer and at that time one of Chicago's most prominent Toreadors, gave up her unlife for her ravenous sire as she awoke.

Helena then assumed the persona of "Portia", a Toreador neonate, as she spent the next 3 years learning about this new world. She did not venture much outside the club during that time, as she awoke to a completely foreign world, wary of things such as automobiles, shocked by television, and bewildered by the mortals of modern nights. Instead she learned about the New World mainly through Blood Dolls, punks, and gangstas, believing the world has become a more enlightened and sophisticated place, but also a scarier place, staying in her haven as stories of things like nuclear weapons unsettled her slightly.

The Succubus Club was destroyed and her beloved ghoul Prias killed during the War of Chicago in 1993. Helena suspects the attack by Lupines was organised by Menele.

Now Helena walks freely under the night sky as Portia, once again seeking revenge against Menele. Apart from her childer and ghouls, the Kindred of America are not aware that this beautiful but aloof neonate is in fact an immensely powerful and ancient methuselah controlling the lives and unlives of everyone within the city of Chicago and its immediate environs.

Later, a Ventrue neonate saw through Helena's ruse and took on the personality of "Portia" for herself. Menele then used his mastery of Dominate, Presence, and Thaumaturgy to forge a mystical psychic bond between Helena and this other "Portia", and planned to carry out a ritual at the new Succubus Club involving the Daughters of Cacophony to send Helena into torpor.

Helena was Beckoned as Menele was, though she resisted giving in completely despite following the call all the way to Tunisia. While there, she massacred a score of Ashirra delegates on their way to the Vermilion Wedding and gorged herself on their vitae. As she fought, she felt her potency withering until the call ceased entirely. This has led her to believe that diablerie will allow her to stave off the Beckoning, which she remains terrified of.

To this end, she has returned to Chicago and enthralled Bret Stryker to Embrace mortals from his Herd for her to feed upon. She searches for a more certain way to remain free of the Beckoning, and shapes Chicago through her schemes as she has since she arrived so many years ago.

After Helena shattered the Beckoning through mass diablerie, she ventured to Chicago and tried to again force her childe into thrall, but the monster Helena had become was something new. Facing her changed sire, Eletria felt their bond unravel. She attacked the weakened Helena, injuring her grievously before abandoning her in the Succubus Club basement.

Path of Blood 4, Elemental Mastery 3, Movement of the Mind 3 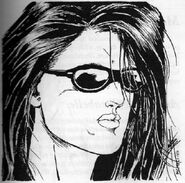 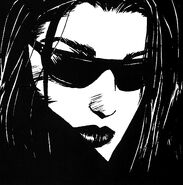