The Rakshasa of Rakshasas

Hazimel, better known as the Rakshasa, was a Ravnos methuselah, a fourth generation vampire, whose Eye became a powerful artifact capable of great destruction.

Not much is known about Hazimel, only that he originated in India and was a rebellious childe that left his sire after an undefined period of time. Rumors tell that he was a stonemason in life who used his Eye as a method of control over various rulers.

The Ravnos claim that he was born "far to the North" and served originally as a guardian of a goddess dedicated to combating the asuratizayya. The asuratizayya eventually retaliated against her by turning Hazimel against her, causing him to kill her. Insane with grief, he ripped out his own eye and fled into the mountains, where he was discovered by Zapathasura. When the Antediluvian offered him vengeance, Hazimel accepted, forsaking his name for the title "Rakshasa". He is said to have bared his Eye as a nazar, which allowed him to see through falsehoods.

The Karavalanisha Vrana records that the Rakshasa became war-weary and confronted his sire with this. The two clashed and the Rakshasa became Zapathasura's second-greatest enemy, supposed to have cast his lot with one of his greater nemeses like Ennoia. In some versions of the story, he left India for either Africa or the Middle Kingdom, while in others, Zapathasura took his Eye from him and imprisoned him until he would repent. Other sources claim that he was betrayed by Ravana after the latter turned to infernalism, because his eye could see through his deceptions.

In later centuries, Hazimel became a forgotten entity, entirely referred to by his epithet. Some even equated him with an Antediluvian. The connection between him and the Eye of Hazimel was only later rediscovered.

In V20, Beckett reunites Hazimel with his Eye. In return, the Methuselah chooses him as his deliverer, imparting him with knowledge of long dead Indus scripts. Hazimel reunites with Chandraputra in renewing combat against the asurazitayya and Ravana who is rumored be behind their new activity.

He may be the methuselah in contact with Khalil Ravana. 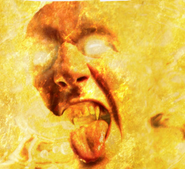 Eye of Hazimel VTES card. Art By Kieran Yanner
Add a photo to this gallery

Retrieved from "https://whitewolf.fandom.com/wiki/Hazimel?oldid=229119"
Community content is available under CC-BY-SA unless otherwise noted.