By necessity, havens generally are secret locations or at least highly secure (ideally both), otherwise the vampire runs the risk of exposure or destruction at the hands of witch-hunters or rivals – or, worse still, the resident might become the victim of diablerie. Many vampires keep their ghouls or other retainers close by, to watch over their slumber, especially if other Kindred know the site to be a vampire's haven. 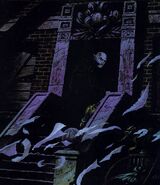 From Havens of the Damned. Art by Jim Nelson

The schematics of the Temple of Eternal Whispers