Member of the Inner Circle
Hardestadt the Younger was a member of the Camarilla Inner Circle, and was thought to be the leader of the entire sect until his final death at the Conclave of Prague, in 2012.

Hardestadt the Younger masquerades as his sire, Hardestadt the Elder. His sire was diableried after being badly wounded in battle and then falling under the fangs of the Brujah Tyler in 1395. The Younger's deception is known only to a selected few descendants of the fallen Ventrue.

In the 15th century, Hardestadt, along with several other Camarilla vampires, held stock in the Muscovy Company, which smuggled vampires across the Atlantic to the New World. Hardestadt used this method to get rid of the marauding Sabbat packs in Europe, over which he had developed an overwhelming hatred.

Around the 19th century, Hardestadt moved to the city of Berlin, although he still retained Castle Daverick as his Italian haven.[1]

In the alternate timelines presented by the sourcebooks surrounding the Gehenna scenario, at some point, the Gangrel researcher Beckett discovered the truth of Hardestadt's identity. While meeting with Beckett, Hardestadt used the Dominate ability Repression of the Obvious to force Beckett to be honest with him. During this time Beckett blurted out he knew Hardestadt was not the original, leaving Hardestadt speechless and filled with rage. After their meeting, Hardestadt sent his Archon Theo Bell to silence Beckett, fearful his identity would be exposed. Bell was unsuccessful, however.

On the eve of Gehenna, Hardestadt met his Final Death when he was killed by the recently rogue Theo Bell, who shot him point blank in the face with his automatic shotgun while Hardestadt was suffering from the effects of the Withering. Hardestadt was running a slave operation in which he was using neonates to stop the effects of the Withering and breaking many Camarilla Traditions in doing so. Bell refused to go along, and allied with the L.A. thin-blood movement, their leader Jenna Cross, and Beckett to take down Hardestadt and his operation.

In 2012, Hardestadt met his Final Death at the end of Theo Bell's sawed-off shotgun barrels. While Hardestadt was taking part of a ceremony with Theo during the Prague Conclave, the former archon launched a surprise attack with the help of his clanmates and together they were able to eliminate most of the Ventrue present - allegedly, even Hardestadt's childe, Jan Pieterzoon.

Hardestadt has dark hair with a shock of gray, blue eyes, a chin nearly square enough for use as a straightedge, and an aura of power and authority so powerful that others nearly had to squint against it. As part of his Clan Curse, he developed a preference for a specific kind of prey and could only drink the blood of those who have lived a military life, looking down on those without actual combat experience.

Arrogant to the core, Hardestadt believes that respect should be accorded to those of greater station. Of course, few can rival his exalted station. He uses bluster and his overpowering will to attain what he wants. Initially thunderously indignant over the anarch's daring and scathingly dismissive of humans, Hardestadt realized at the Convention of Thorns that he must temper his excesses of opinion somewhat in order to promote harmony among the members of the newly born Camarilla. With grim resolve, Hardestadt the Younger assumed his sire's visage through his mastery of Presence.

One popular theory among fans is that the elder known as "Hardestadt the Younger" is in fact Jürgen, having faked his own Final Death and created a new identity for himself out of necessity. Consider this: a blond, militant Ventrue of the Sixth Generation, with a feeding obsession revolving around soldiers, possessed of a visionary mindset, an autocratic bearing, and a hidden drive for personal survival. Are we speaking of Lord Jürgen von Verden, or Hardestadt the Younger? While Lord Jürgen supposedly met Final Death, Hardestadt the Elder refusing to toss away the blood of his failure of a childe, and instead ordering (or Dominating) the wayward ancilla into assuming an alternate identity is totally within character. While this has deep implications for any characters who survive from the Dark Ages to modern nights (or poor Jan Pieterzoon, who suffers under the same fate as his potential sire, as Beckett discovers), it ultimately matters little for those vampires who stick to one timeline or the other. The truth of the matter died when Hardestadt fell to Tyler’s fangs — while it greatly enhances the irony if his broken puppet realizes Hardestadt’s Dream, the Camarilla won’t fall because of it.

Can only drink from soldiers and military personnel 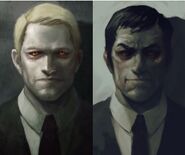 Retrieved from "https://whitewolf.fandom.com/wiki/Hardestadt_the_Younger?oldid=273089"
Community content is available under CC-BY-SA unless otherwise noted.