White Wolf Wiki
Register
Don't have an account?
Sign In
Advertisement
in: Cappadocian, Harbingers of Skulls, Hecata,
and 4 more

The Harbingers of Skulls are a rare bloodline who surfaced in the Final Nights. While few Kindred suspect the truth, they are the last remnants of the Cappadocian clan.

Though the Cappadocians were all but wiped out by the Giovanni, as the clan of death it was hardly surprising that some of its members, who had mastered Mortis, would assume great power in the Underworld. The cabal of 50 ancient, powerful and very angry Cappadocians who would become the Sabbat Harbingers did just that; imprisoned in the Underworld by a seal at Kaymakli, they bided their time, waiting and watching for a chance to return to the Skinlands and enact vengeance for their clan and Antediluvian.

Other Cappadocians, meanwhile, restless and impatient, ventured deeper into the Underworld, journeying through the Tempest until they reached Enoch, center of power for the Tal'mahe'Ra, where they were received as honored guests. They struck a bargain with the Tal'mahe'Ra, maintaining and defending Enoch in return for safe haven and freedom to study the Labyrinth's mysteries.

Others were former infitiores saved from their fate by the Followers of Set. In exchange for necromantic secrets, the Serpents agreed to protect them from their numerous enemies. In time, some of these Harbingers entered the Underworld and became lost, only to return after the seal of Kaymakli shattered.

Accounts of how the Harbingers returned to the lands of the living vary. Some say that it was the Sixth Great Maelstrom that gave the Harbingers who sought revenge their chance. With the Shroud weakened, they broke through and claimed or formed new decayed bodies. Others have it that it was thanks to the Capuchin, whose necromantic magics broke the seal which imprisoned the Harbingers.

The Harbingers of the Sabbat have been members for only a few years, and few of the youngest members of the sect have ever heard of them, let alone seen one. Apparently, one of their number came forth with a proposition to the Cardinals, prisci, and Regent, who conferred and welcomed the Harbingers to the Sword of Caine. Since then, the Harbingers of Skulls have amassed unheard-of power in the sect (given their small number, which is estimated in the low hundreds). The Black Hand, the Sabbat Inquisition, and even the ranks of the prisci now claim members of the Harbingers among them. Scions of the Sabbat appear to reap great benefits from the Harbingers' death magic, maintaining contact with fallen allies or tormenting enemies from beyond the wall of Final Death. Indeed, the Harbingers seem more than willing to offer aid to Sabbat compatriots – in exchange for favors to be determined later.

In truth, while they are nominally Sabbat members, they merely seek allies in their vendetta against the Giovanni and the Camarilla clans who betrayed them.

The Harbingers of the Tal'mahe'Ra are more interested in studying and exploring the Underworld than in revenge. Even so, they too have availed themselves of the chance to return to the Skinlands, many creating ghouls and Embracing childer to help them function outside of the Underworld.

At the instruction of Lazarus and the Tal'mahe'Ra, this faction of Harbingers have been despoiling and corrupting locations to create additional shadow bastions in the Underworld for the sect, many of which are reflections of locations held by the Setites. For the Tal'mahe'Ra, this is a strike against their ancient enemies, but Lazarus's motives in this are less clear.

During the 2010s, the Harbingers launched an assault on the Clan Giovanni's holdings in Venice, with the assistance of a number of young Giovanni. This was one of the immediate causes of the Family Reunion.

Both the Hecata Harbingers of Skulls and Cappadocians have a great deal of influence over covering up killings done by them or their companions, and they learn far quicker their arts of necromancy than most Hecata.

Because of the clan-wide changes in the blood, Hecata Harbingers of Skulls no longer exhibit their morbid appearance. In its place is the new clan-wide bane of the painful Kiss.

Curiously, and although it is not widely known, the Harbingers of Skulls and the Hecata are immune to the Beckoning.

The Harbingers of Skulls in the Sabbat have little organization, and most eschew social company, preferring to be left alone to study or hatch their plots. They do gather infrequently, but to what purpose has never been confirmed. Vampires outside the Harbingers' circles suspect everything from schemes to bring down the Sabbat from the inside to symposiums on the most recent research involving the lands of the dead.

They do maintain some form of visible hierarchy, however, as evidenced by their masks and rituals. The more esteemed or accomplished members of the bloodline wear much more elaborate masks, and they are ritually acknowledged by lesser Harbingers, though the precise system has eluded onlookers to date.

The Sabbat Harbingers are few in number, and universally powerful. They have had centuries of death in which to contemplate their revenge and, while they may act separately, have no doubt formed a plan which they will execute as one when the time is right.

Unbeknownst to many, a subtle split runs through the bloodline, tracing itself from the Capuchin. While one of the impersonators of the Capuchin is Lazarus, the other is his brother Japheth. Japheth has taken on to incite members of the bloodline against the loyalists of Lazarus, seeing them as subverting the remnants of the Cappadocians for their own ends.

Sabbat Harbingers of Skulls have morbid concepts, many of which are archaic or foreign to the modern nights. The bloodline favors Mental Attributes and Knowledges, and its members cultivate numerous Backgrounds. Few Harbingers deign to follow the tenets of Humanity; they are more frequently attuned to the Path of Death and the Soul or some bizarre variant of the Giovanni's Path of Bones.

Cursed by Caine's blood with the countenances of corpses, Sabbat Harbingers often flay the tattered, grave-tainted flesh from their heads, leaving them with the grinning rictus of their namesake. Masks and ceremony play an important part in the bloodline's culture, and elders among these Cainites maintain vast collections of ritual masks and implements that they wear and use in their necromantic rites. It has been rumored that the vitae in their veins is ancient and quite potent, and perhaps their claims of grandiose history are not far from the mark. Whatever the case, the Harbingers of Skulls simply ignore inconvenient lines of questioning, preferring instead to spend their hours amid the tombstones of cemeteries or in deep contemplation of the powers of the dead.

Most Harbingers have a deep resentment for Cappadocius and his legacy. Seeing him as the archetypical abusive Antediluvian who sacrificed hundreds of his own line out of his own delusion, they put their support behind the Sabbat whose aims are to stop similar excesses from other antediluvians. In the same vein, they hate the Giovanni, seeing them as willing pawns of Cappadocius and their purge of the Cappadocians merely as a reenactment of the Feast of Folly.

Some Harbingers, confused by their long time among the dead, have forgotten that they were once vampires at all. Instead, these creatures see themselves as Risen that have taken control over vampire bodies instead of their original corpses. They believe that one day, they will strike against all vampires and drag their souls into the underworld before the Lady of Fate.

The Sabbat Harbingers have to this date not embraced a single new vampire since their arrival in the Skinlands. The reasons for this are unknown, but the most likely cause for this would be that few modern people have much to offer to these ancient Cainites. Moreover for their purpose (i.e. vengeance), their necromantic prowess and connections to the Black Hand are probably much more useful than a brood of neonates. Others point to an edict of Lazarus that only once every Harbinger has been saved from the Underworld, Embraces should be allowed again.

Their Tal'mahe'Ra kin, however, have not felt so disinclined, and this faction's numbers, though small, have been growing quickly since the seal was broken. Such progeny, however, is seen as second rate unless it has spent several years in the Shadowlands.

As a member of Clan Hecata, a Harbinger can purchase the following abilities:

From Guide to the Sabbat 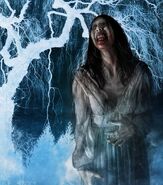 From Lore of the Bloodlines