Hélène, la Juste, was an influential elder of the Toreador during the Dark Ages. She was a Queen in the Courts of Love in the region of Champagne.

In her mortal days, Hélène grew up as one of three daughters of a noble. Delighting in social mores and courtish art like dancing and music, she quickly drew the attention of Salianna, a Toreador who attended Parisian noble festivities regularly.

Fascinated with the young girl's natural beauty and wits, she decided to groom her into adulthood and then give her the Embrace. When Hélène fell mortally ill with fever, however, these plans were abandoned and the two ventured to Champagne. There, Salianna mentored her childe in order to take the position of Queen of the Courts of Love in Champagne.

Under Hélène’s supervision, the court flourished, but it had also gained a reputation for attracting brash young Cainites who were over eager to prove themselves. She worked closely together with her sire in political situations and Salianna did not feel obligated to punish her childe after the latter had aided Esclarmonde during the Albigensian Crusade.

Hélène la Juste, Queen of the Court of Love 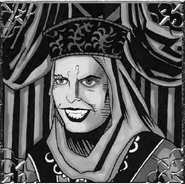 Add a photo to this gallery
Retrieved from "https://whitewolf.fandom.com/wiki/H%C3%A9l%C3%A8ne_la_Juste?oldid=239541"
Community content is available under CC-BY-SA unless otherwise noted.