Gustav Breidenstein was the authoritarian Prince of Berlin until his domain was divided in two, and his leadership over west Berlin usurped by his own childe. Gustav remained in control of the eastern part of the city, and was obsessed with taking the western part back.

In 1997, he suffered the Final Death after being contaminated by the Blood Curse.[1] After his demise, the city of Berlin was unified once again, but this time under the leadership of Wilhelm Waldburg.

Gustav Breidenstein and his sire, Ilse Reinegger, have been around Berlin since 1244. Breidenstein diablerized his sire when the Inquisition was at its peak and ruled Berlin as the sole prince from there on. Unlife under his rule was strict and harsh, as he forced his Kindred subjects to submit to a Blood Bond with him and was the sole inheritor to the Right of Progeny.

His practice of staking vampires who did not introduce themselves and letting them to die in the sun caused major problems in 1575 when he killed a Tremere in that way, earning the ire of the Clan in form of a stern note from Justicar Karl Schreckt. Breidenstein responded by staking Schreckt and sending him back to Vienna with his regards, resulting in very stressed relations between him and the Tremere. Relations deteriorated further after the Thirty Years War, when he accused the Clan of conspiring against him.

During this time, Breidenstein concentrated on making Berlin one of the leading cities among the Germanic states. His hopes came to fruition when Berlin became the capital of Prussia. Using his newfound influence, he encouraged conflicts with Austria in his vendetta against the Tremere and began driving the Lupines out of the city by fetching other Kindred from other Clans into his city. It was there that he earned another enmity with another Clan, the Toreador, for staking and burning three visiting Clan members. The two began various conflicts during the Napoleonic era, that resulted in the French occupation of Berlin, infuriating Breidenstein to no end.

After a series of campaigns against the Anarch and Sabbat packs around his domain, he began his revenge by aiding Bismarck (whom he even proposed the Embrace, although Bismarck declined) in creating of a unified Germany as a means of combating his French enemies. When the First World War began, he rejoiced, hoping to humiliate his enemies in the same way they had humiliated him. During the same time, his own childe, Wilhelm Waldburg, had risen to prominence for making various alliances with members of other Clans. When Germany lost the war, Berlin and the state were financially devastated, leaving the ancient prince in utter astonishment. His own childe approached him and tried to convince him of changing his ways.

Breidenstein responded by brutally suppressing a revolt within his domain, but for everyone else in the city, it was clear that Breidenstein no longer controlled the city. After hundreds of years, he assembled the primogen in order to satisfy the demands of the higher ranking vampires within his domain. Burning with anger, Breidenstein searched for means to rise again in power and found it in the form of Adolf Hitler.

Through his ghoul, Himmler, he contacted him and used the mortal SS for a raid against his own treacherous childe and the primogen forcing them to stand down. When the Second World War erupted, he met with Hitler and tried to use him against France and the Toreador. His attempts to dominate the man, however, failed often and he began to suspect that everyone else was also trying to control his puppet. When Soviet troops marched into his city, followed by Lupines that used the power vacuum through the destruction of many Kindred, he was again astonished. With the intermediary of Daryl Lutz, a Gangrel,, he was able to make peace with the werewolves, granting them their territories and promising brutal retaliation against every Kindred that would try to enter their domain.

When Berlin was divided, Breidenstein found himself in the Eastern part, his rivals in the Western part. He began to support the Wall and the Cold War as a means of ensuring his own power. When the Wall fell, he found himself at odds with his rivals again, plotting their destruction in order to regain his title as one of the most powerful princes in Germany, feeling himself to be the only one who could lead Berlin.

The bitter struggles between sire and childe, cat and mouse, continued until 1997 when Gustav suffered Final Death after being contaminated by the vampiric disease known as the "Blood Curse".[1] After his demise the city of Berlin was finally unified once again, but this time under the leadership of Wilhelm Waldburg. Gustav's dreams turned to ash in the wind. 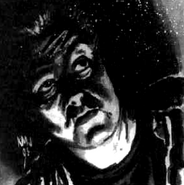 From Berlin by Night