The Gurahl are werebears, one of the surviving Changing Breeds of the Classic World of Darkness. 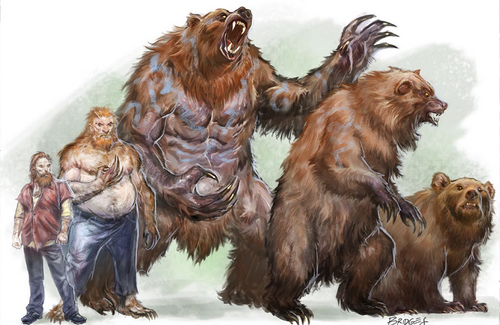 According to their lore, the Gurahl are Gaia's original protectors, created to ward off the destructive power of the "Pattern Breaker". When it grew too powerful for them, they petitioned Gaia for help, and she created the Garou.

Slow to anger, Gurahl tend to be healers and protectors rather than warriors. Rare since the War of Rage, they were targeted for refusing to teach the Garou the secret of resurrecting the dead.

Gurahl are blessed by Gaia with strong wills and many traits of their bear cousins. Their sense of smell is far superior to that of humans, though when in non-human forms, their eyesight is poorer. They have a level of conscious control over their biorhythms, allowing them to alter the speed of their metabolisms, but are susceptible to the seasonal urges of bears, becoming sluggish and lazy in Winter.

The Gurahl have only two breeds: Homid (born of humans) and Ursine (born of bears). There are no Metis Gurahl - their mates are chosen through a special ritual, and even should two Gurahl mate, no child is ever born of their union.

Gurahl have five auspices which, like those of the Garou, correspond to phases of the moon. Gurahl auspices are not fixed, however; each Gurahl progresses through all five in the order below during their lifetime, though individuals may spend more or less time in certain auspices.

The Gurahl auspices, with their Garou equivalents, are:

Gurahl forms are analogous to those of the Garou:

There are four major Gurahl tribes, each representing a particular species of bear and geographical region (though exceptions to both do occur within each tribe):

Gurahl gifts and rites are primarily concerned with healing and the purification of the land, and include few outright martial powers. All Gurahl can learn the healing gift called Healing Tongue (equivalent to the Children of Gaia gift Grandmother's Touch), and most do.

As noted above, the Gurahl's most extraordinary and well-guarded secret is returning the spirits of dead people to their bodies. This can only be achieved soon after death, and at great personal and spiritual cost, using the gift Gaia's Breath. In cases of dire need, Gurahl may perform the Rite of Fighting the Death Bear, in which they must challenge Mangi, the aspect of Bear attuned to death. This rite is only ever used to revive fallen Shapeshifters, and even then, almost never on non-Gurahl.

Gurahl recognize three types of renown: Honor, for devotion and respect; Succor, for acts of healing, purification or giving aide to others; and Wisdom, for restoring, preserving or uncovering knowledge or gaining a deeper understanding of oneself.

Gurahl live solitary lives often in areas of remote wilderness, and seldom encounter other Fera. They have limited familiarity with the Ananasi or Rokea, and almost none at all with the Ajaba, Nagah, or Kitsune.

While they are happy the Ratkin remain in their cities, they maintain friendly relations with the Bastet, Corax, Mokolé, and Nuwisha, particularly missing the company of the latter. While they still feel great anger from the War of Rage, they are willing to look past it and work with the Garou, who they once knew as their little brothers, to stave off the Apocalypse.

Gurahl in Crinos form have a perception value modifier of +1 instead of -1; health level adjustments are Arthren and Ursus +1, Crinos and Bjornen +2; damage adjustment is +1 in Arthren, +2 in Crinos and Ursus, and +3 in Bjornen. A Gurahl with 3 points in Bio-rhythm can absorb one more point of damage than normal, rising to 2 extra points of damage with 5 points of Bio-rhythm, and every 2 Bio-rhythm points improve resistance to toxins of all kinds by lowering a Gurahl's resistance target number by 1.

As long as a Gurahl fights with Brawl, she uses Strength instead of Dexterity as the characteristic for checking if a hit is made. <request source>

<Home Brew should be listed as such>