Grondr were the wereboars, one of the extinct Changing Breeds of the Classic World of Darkness.

The Grondr were destroyed during the War of Rage when they came to the aid of the Gurahl. Their Kinfolk were enslaved and their beast Kin domesticated, though the last true Grondr Kin eventually sought the aid of the Wyrm, and were corrupted into the Skull Pigs. Only the Gurahl and Mokolé remember much about the Grondr, though hints of their nature survive in the folklore of some human cultures. Their purpose was to be Gaia's cleaners and groomers, tending to the Earth's health by rooting out filth and parasites.

The Grondr believed that they were nearly incorruptible as a result of their duty. Wereboars charged willingly into Bane nests, and waded into powerful Blights and Hellholes to cleanse the taint. Where other Fera might retreat for fear of corruption or possession, Grondr would advance, daring the minions of the Wyrm to steal their bodies or warp their minds. When a spirit attempted to posses one of their Kinfolk, the wereboar would not only repel the invader, but tear it apart in the process. This was enabled through their incredible strong metabolism, which could digest even Wyrm taint.

The wereboars also uncovered corruption hiding in the other shapeshifters. If the taint was not total, the wereboar would try to consume it herself, or attempt to cleanse the victim in conjunction with a Gurahl. When they could not remove the taint, the Grondr were perfectly willing to execute the victim themselves. The Grondr saw little difference between the taint of the Wyrm and overwhelming pride, ambition, and cruelty. Grondr investigators would stop short of murdering another Fera for the crime of vainglory, but they were not above teaching her a lesson. A Grondr’s lessons were rough, painful, and humiliating — made all the worse by the breed’s hypocrisy. For all that they thought pride a crime, few among the wereboars thought to look at their own actions.

Grondr had three breeds: homid, metis, and scrofa. They lacked auspices; instead, each Breed had specific duties.

Grondr forms were analogous to those of the Garou:

The Grondr were an active and aggressive breed. They lived in pack-like groups called Sounders, each lead by a king or queen who held their title by defeating all who challenged them in ritual combat. Each Sounder ruler was equal to all others; they had no hierarchy beyond individual Sounders.

Most of the Gifts of the Grondr focused on cleansing Taint in any form. Other spirit-magics gave the Grondr even more powerful weapons against the Wyrm’s taint. The most potent was a rite that let them literally eat a Bane that had possessed a person, place, or object. While it languished in his belly, the ritemaster could use the Bane’s charms without running the risk of corruption.

The Grondr had particularly strong ties to the Gurahl, with whom they worked in tandem to heal Gaia. When the Garou attacked the werebears, the Grondr stood by their side and paid the price.

Other Fera had a relatively low opinion of the Grondr, believing them tactless and arrogant. Their powers over corruption led some Fera (mostly Garou) to the conclusion that they must have been in league with the Wyrm somehow. The Nagah in particular resented the wereboars for targeting corrupt Fera, a task that was their domain. Most Fera turned a blind eye to the initial conflict between werewolf and wereboar, hoping that the pigs would be taught a lesson in humility. When they discovered the genocide the wolves had in mind, it was already too late to stop it. 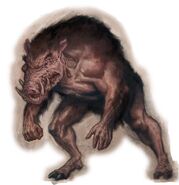