The Grimaldi are one of the four Revenant families in service to the Sabbat - they are the most valuable and humane of them.

Integrated during the late Middle Ages into the Clan, the Grimaldi were originally an Italian merchant family. Although not as powerful as those dynasties that would rise during the Renaissance, the Grimaldi were survivors, shifting their support among various noble houses and other dynasties. This allowed them to live in relative comfort, while they were seldom seen as rivals. When the family expanded to Bohemia, they met several native Tzimisce voivodes who desired to gain a foothold within the Holy Roman Empire.

The family was introduced to ghouldom swiftly and bloody and served as agents in lands most Tzimisce were uncomfortable to travel towards or that lay in the hands of rival Cainites. When the Renaissance began, the Grimaldi successfully integrated themselves into the rising bourgeoisie.

Siding with the Anarchs during the Revolt, the Grimaldi now served the Sabbat as deep-cover agents, who handled the unpopular affair of dealing with mortal agencies, preserving and maintaining the Masquerade and supplying the sect with money. The Grimaldi are very successful at this, retaining a close touch to mortal society and being able to compete even with the Giovanni and Ventrue. Many young Grimaldi are transferred from private school to private school to guarantee the best possible education and hide the slow aging process and blood-borne quirks.

Many Grimaldi silently fear the Sabbat and its inhuman ways, worrying that once their Tzimisce masters withdraw their protection, they will be torn to shreds for their "soft" ways. To this end, the family searches for ways to protect itself from that fate, either by making themselves too useful to be exposed or seeking a way to defect.

Weakness: During the Dark Ages, the Grimaldi had only a blood pool of 8 rather than 10, reflecting their recent inclusion into the Clan’s arsenal. In the Modern Nights, every Grimaldi is blood bonded to a Sabbat official, at the minimum of a bishop.

Morality: Many Grimaldi follow tempered Paths of Enlightenment, like the Path of Honorable Accord or the Path of Caine, but some still manage to retain their Humanity. 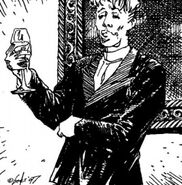 Retrieved from "https://whitewolf.fandom.com/wiki/Grimaldi?oldid=241325"
Community content is available under CC-BY-SA unless otherwise noted.