Sabbat
Goratrix, also known as the Betrayer, was the most ambitious, talented, and reckless of Tremere's seven disciples.

Sometime before the end of the first millenium CE, Goratrix was a mage introduced into House Tremere after Tremere himself saved him from the stake as a young man in Poitou, France. He soon proved to be talented, ambitious, and determined, earning him a place as one of Tremere's closest allies, but developed a rivalry with another of Tremere's apprentices, a Swede called Etrius, whom he despised for self-righteousness and overcaution. Along with rising to the top of his inner circle, Goratrix became Tremere's lover as well.[1]

In 980, it was Goratrix that led the ritual to consecrate Ceoris as the prime chantry of a chain of lesser guildhouses placed across Transylvania, to harness the vis in the soil. During the ritual, Goratrix emasculated himself to lay a powerful seed for the chantry, but thanks to the failure of the participating magi, Ponticulus, who was killed and his head, along with Goratrix' member, were placed in the earth by hated Etrius, he was weakened. As lord of Ceoris, he and Etrius competed even more furiously for their master's favor and after Etrius discovered that magic was dying, both searched for ways to maintain their immortality. Goratrix was put in charge of the project.

When Myca Vykos was accepted in the Order and learned the basics of spellcraft, he proved such an adept student that he inspired jealousy in Goratrix. His later attempt to betray Myca to Tzimisce Cainites backfired, and the young boy found himself among the Fiends.

He was the mage responsible for creating the Ritual of Usurpation that turned the Tremere into vampires in 1022 by experimenting on native Tzimisce, and was responsible for convincing the rest of the House leadership to adopt (neglecting to mention certain undesirable side effects) and eventually spread it throughout House Tremere. He was also the one who pushed to quickly introduce as many members of the House into the fold as possible.

During the Omen War, Goratrix, with the aid of Virstania, created the first Gargoyles in 1121 and unleashed them against the attacking Tzimisce. He was also the first one to experiment with the new devised Thaumaturgy and headed many additional research projects, such as an abandoned project of manufacturing vitae.

After Tremere diablerized Saulot and entered torpor, Tremere was manipulated somehow to send Goratrix instead of Meerlinda to act out his will in France, an act that greatly infuriated Goratrix. He left Ceoris in 1133 but soon learned, however, that the intricate politics of Paris were more to his liking than the secluded walls of the Tremere fortress in Transylvania. While he conspired against Etrius, who had succeeded him as lord of Ceoris, he involved himself in the politics of the french nobility, where Goratrix got into conflict with the Knights of the Temple of Solomon.

He was finally able to bring Philip the Fair to arrest the Templars in France around 1307. When Tremere awoke, he recognized that he made a mistake sending Goratrix to France, and also discovered that he must have been manipulated. He summoned Goratrix to Ceoris to be punished, but in a panic Goratrix fled, leaving his clan behind.

Goratrix's ambition eventually led him to defect to the Sabbat in the 18th century, forming a parallel society, House Goratrix, conventionally called the Tremere antitribu. He made his personal chantry in Mexico City, far from his parent Clan. The House continued to exist until 1999, when Tremere, losing his war with Saulot, possessed Goratrix, sealed his soul in a mirror and destroyed the antitribu. By 2018, however, a group claiming the House Goratrix name was again prominent within the Tremere, meeting with representatives of the main clan and House Carna, though how closely they are connected to the original House Goratrix is unknown.

Goratrix prided himself on his appearance. With dark brown hair, hazel eyes, and a clean-shaven face, he attracted admiring glances from those around him, yet few missed the cruelty that lay just below the surface. His nose was strong and broad, his mouth was generous. He dressed in stylish clothes that spoke of wealth without ostentation and cultivated the image of himself as a scholar, sage, and genius.

V20 presents an alternate continuation of the events detailed above. Here, Goratrix already claimed during the Dark Ages that he was, in fact, Tremere, having been forced outside his body after he was possessed by Saulot and that the thing that the Clan served was an abomination (likely referring to Tzimisce and Saulot struggling for control over the body). In this case, Goratrix' soul would have been replaced in his own body far earlier, and what happened with his soul after that is uncertain.[2] However, all canon outside of Lore of the Clans depicts Goratrix's soul only having been replaced in the 1990s.

Goratrix's known lovers include Therimna and Tremere himself while he was a mortal. Prior to his self-emasculation, he showed an interest in matters carnal unusual for a magus, but was described by Ponticulus as sleeping in an unshared bed afterwards. This suggests the botched ritual may have ended his intimate relationship with Tremere; this would have undoubtedly contributed immensely to his hatred of Etrius, who he blamed for the ritual’s failure.

The ritual of the founding of Ceoris, led by Goratrix. Art by Vince Locke 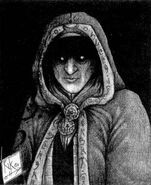