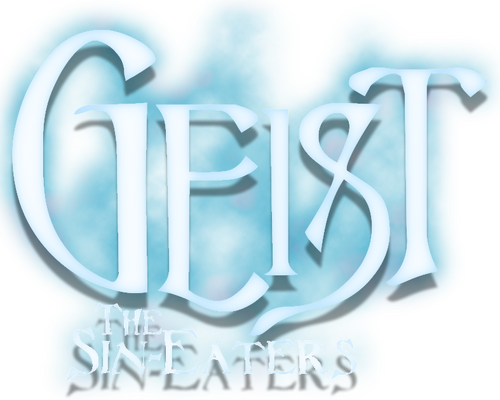 Geist: The Sin Eaters is the seventh Chronicles of Darkness game to be released, and the fourth limited run series. It was first announced on August 14, 2008 in the back of the HTV: Hunter: The Vigil Rulebook

Unlike the other limited release lines, which had four sourcebooks in addition to the core book, Geist only had one sourcebook released, World of Darkness: Book of the Dead. Minor adventures and character books were been released via .pdf. A second edition of the game was released in PDF form on March 30, 2020.

Sin-Eaters, also known as the Bound, are mortals who have died, but made what is referred to as the Bargain with strange, alien spirits called Geists to return to life. This does not come without a price; they must share their body, mind, and desires with the Geist, and often spend as much time confronting the death around them as well as appeasing their new "friend" as they try to continue their own life.

The Bound regain mystical power, or Plasm, depending on their archetype. They also must maintain Synergy, reflecting the balance of how well they work with their unearthly partner.[1]

Geists are a special kind of spirit who are former ghosts that have separated themselves from their mortal identities, embracing the ideas and imagery of their deaths, coming to embody those images. They are capable of making special pacts with humans near death, combining with them to create the Bound.[2]

Abmortals have managed to artificially extend their lives, often by sacrificing the lives of others. Their unnatural natures potentially brings them into conflict with the Bound.

A Haunt is the power a Geist can channel. They are fueled by Plasm, the residue left over by encounters with ghosts. The type of Haunt they can use is decided by their Burden. [3]

When one of the Bound has their near-death experience, it also gives them a certain Key; this Key taints the way that a Bound can use their powers, or unlocks new ones. If used too often, however, the Bound will become Doomed. [4]

Because two personalities and mind are inhabiting the same body, the human Bound and the Geist must learn to work together to somehow obtain their goals, making them prone to weakness when the two halves just don't get along. Psyche describes the bond that Geists and Bound share with one another; the stronger a character's Psyche, the more will each half of the Bound is willing to contribute to a goal.

Characters can also strengthen their Psyche through Anchors, or direct links to their Geist and the Underworld. [5]

A Krewe is a term for an alliance of Sin-Eaters. They scale from small, localized groups akin to street gangs to grander occult-based organizations akin to the secret societies that Sin-Eaters gathered into originally.[6]

This Geist: The Sin-Eaters-related article is a stub. You can help WWWiki by fixing it.
Community content is available under CC-BY-SA unless otherwise noted.
Advertisement