Garou is a term used by the werewolves to identify their race and culture. The term is used nearly interchangeably with Garou Nation.

In the Middle Kingdom, the corresponding term is Langren (Wolf People) or Ookami Senshi (Wolf Soldiers).[1]

According to their own mythology, the Garou were designed to be Gaia's fangs and claws and they are quite adept at this. Today, after the War of Rage, they are among the most numerous Changing Breeds that still exist. 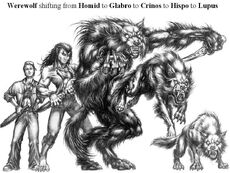 Werewolves cannot breed among themselves to preserve their lineage; their blood is too potent, and the result is always a deformed Metis. To continue their bloodlines, werewolves must mate with either humans or wolves. However, the chance that any children or cubs that result from such a pairing will breed true is small. In most cases, the spirit half of the werewolf isn't passed on and the offspring is either a normal human or wolf.

Werewolves born to human or wolf families are initially indistinguishable from their mortal siblings. There is no detectable "Garou gene" and DNA testing does not reveal anything amiss. Newborn werewolves simply appear to be normal humans or wolves in almost every respect. Only a very few are even told by their parents that werewolves exist at all. However, young werewolves are prone to strange dreams and fits of temper that alienate them from their relatives or friends.

Garou adhere to the Litany, a code which depicts the laws of the Garou Nation. The place of each individual Garou is dictated by the moon phase under which he or she is born. There are five Auspices that mandate a Garou's function within werewolf society. 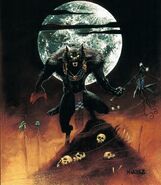 A garou, as depicted at the front cover of Werewolf Players Guide. Art by Matt Wagner.

Retrieved from "https://whitewolf.fandom.com/wiki/Garou?oldid=234011"
Community content is available under CC-BY-SA unless otherwise noted.