François Villon is the Toreador Prince of Paris and France.

Born in 1197 CE, François attracted the attention of the methuselah Helena when she passed through the town of Paris looking for Menele. He was a linguistics scholar with aspirations to marry a noble heiress, and Helena gave him more than he could ever desire.

She Embraced him in 1230, and from her François learned the value of constructing a colorful backstory. To that end, Villon carefully crafted a litany of contradictory origins. Claiming any number of heroic (and unverifiable) deeds as his own, Villon elevated himself above the rank and file of the Kindred, leaving behind those with no ambition or vision. Whether the tale involves slaying the Dragon at the side of St. George, crossing the Alps with Hannibal or watching Christ turn water to wine, Villon claims to have been there. It is claimed that he was especially beloved by the scheming dowager Queen Catherine de' Medici in the 16th century. His greatest ability is to appear more powerful than he actually is. He knows that a vampire can never truly "control" an aspect of mortal life, but he has no qualms about appearing as if he does. This illusion granted him the respect of his peers.

That's the legend everyone knows about him; but the truth is slightly different.

Born in 1200 in Lorris, not far from Orléans, Guillaume quickly attracted the attention of the Toreador of the Courts of Love being the writer of the Roman de la Rose, one of the major poetry of its time and even during the Renaissance. In 1230, Salianna even invited him to organize trials which would then determine who of all the suitors would be worthy of Embracing him. Unfortunately for them, the powerful methuselah Helene of Troy being at this moment in Paris, was intrigued and fascinated by this poet succeeding in sublimating the emblem of the Clan and the Courtly Love. She successfully passed the trials and Embraced him.

Unfortunately, the Embrace had disastrous effects on Guillaume, who then lost this "spark" that the artists have. Sinking into a deep depression unable to continue her work, Helena abandoned him to his fate.

He then spent many years in a suicidal lethargy, waiting for dawn, for the first rays of the sun on the horizon; but without ever having the courage to concretize this drive to end his state of endless damnation.

It's only in 1242, pushed by a fortune friend, a Malkavian, to seek the "Rose" of his unfinished masterpiece, that he ends up meeting a 19 years old young actress, named Violetta, whom he will make his ghoul then will embrace eight years later. Despite the fears he had about her, she adapted and properly supported her Cainite condition and was even a positive vector for her Sire.

Around 1270, Guillaume took on a new identity. Now named Jean de Meung, he resumed writing the Roman de la Rose; but the unlife and the depression having transformed him, his work no longer had the candor of its beginnings and was full of cynicism, a satire of the society and particularly on the Church, assassinating the principles of the Courtly Love. Going so far as to mock his ancient writings and texts, he was reborn, changed, being from that moment the proud, excessive, passionate; but often brutal Cainite that will mark the History of France.

Later, in 1493, one of his ghoul, having served as his nominee for a few years already, disappointed him greatly and fell under his blows. He then changed his identity one last time, taking that of the late ghoul, a renowned French poet called François de Montcorbier or François des Loges; but better known under the pseudonym of François Villon under which Guillaume will be known as prince of Paris and France.

When Henri of Navarre became king, François took time to visit other Kindred throughout France and the Continent, and returned as a Villon descendant during the reign of the Sun King, Louis XIV. François served as the chief lieutenant of his predecessor, Beatrix, until the time of the Revolution. Ignoring warnings from Vannevar Thomas about unrest among the French populace, he was attacked by revolutionaries and forced to fake his death, fleeing to a safe haven in Britain for several years.

When he returned during the rise of Napoléon, François rallied the Toreador, reclaimed Paris, and declared himself prince in the process. He looks back with pain on his time of exile and has remained in France since the late 1790s.

Victorian Age: Vampire Rulebook states that Villon had at that time a new paramour - a Tzimisce. The Prince rarely spoke his lover's name, but once Cornelius Netchurch overheard him call her Sasha.

In modern nights, he is one of the eldest and most influential princes of Europe. Villon's childe, Violetta, served as the Justicar of their clan for at least two centuries, from 1666 until the twilight years of the Victorian Age. Another of his childer, Calabris, was tempted by the Sabbat and infernalism before he vanished with the Midnight Circus.

Prince Villon rules the City of Lights and particularly his special pet interest, the fashion community, from the seat of Toreador power in the 1st Arrondissement at the Louvre. His words are absolute law with regard to art and culture, not only in Paris but throughout much of France and the "civilized" world as well. He is especially fond of beautiful women, and many famous models have given of their blood to the prince of Paris.

François is a tall, dashing man with black hair and brown eyes. He wears elegantly cut dark suits with wild neckties and he smokes the finest cigarettes in an ebony holder.

In A World of Darkness Second Edition, Villon is mentioned to have assumed the princedom only after the French Revolution. In the Transylvania Chronicles III, in the scenario playing right before the Revolution, Villon is already Prince and has been apparently for some time, with no mention of a predecessor.

With new information given by the 20ADAV: France By Night, the fact that Villon previous known birthdate is 3 years earlier than the true one mean that Villon lies about his own birth date probably to hide is real identity. Maybe he doesn't want to be seen as Guillaume de Lorris anymore because he changed so much, that he is in fact another person. 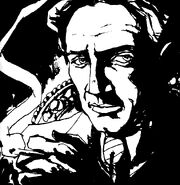 Retrieved from "https://whitewolf.fandom.com/wiki/Fran%C3%A7ois_Villon?oldid=250786"
Community content is available under CC-BY-SA unless otherwise noted.