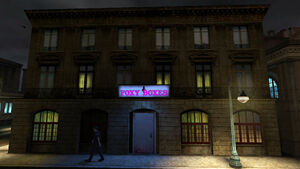 Foxy Boxes is a shipping warehouse on 2nd Street in Santa Monica that serves as a haven to a Wan Kuei.

Foxy Boxes is a shipping warehouse whose employee Virgil Crumb was admitted to the Santa Monica Medical Clinic morgue. Presumably, Crumb was killed so the Wan Kuei could have a place to operate and observe undisturbed.

One of the offices was used by the Wan Kuei to record notes about the comings and goings of the area's Kindred, and send them to his "mistress." He observed the prince's agent shortly before that agent arrived and destroyed the Wan Kuei.

The intro cinematic for VTM: Vampire: The Masquerade - Bloodlines , where the PC gets Embraced, is physically located on the second floor of Fox Boxes, overlooking the Asylum. However, no such apartment is located inside the building.

Retrieved from "https://whitewolf.fandom.com/wiki/Foxy_Boxes?oldid=263591"
Community content is available under CC-BY-SA unless otherwise noted.