First Team is a term used by Pentex personnel to describe the crack squads deployed by the company on the most dangerous and vital missions.

The First Teams were developed when Pentex was trying to create the strongest, fastest, and most controllable fomor possible. This is where the long, multi-segmented First Team recruitment, training and corruption program comes in. They are the elite, and are built based on statistical data, mission requirements, and available resources, ignoring the personal preferences of its members.

Most First Teams include both humans and formori. Exceptions exist — VIP protection details that can’t be exposed as supernatural may be entirely human, while brutal heavy assaults against the most fortified enemy may call for only the toughest fomori.

Troops shift between teams and can be reassigned with little notice, especially in high casualty areas. Despite this, most First Teams have a semi-permanent roster and a sense of camaraderie develops between teammates, especially after saving each other a few times. Experienced Teams with a good success record may have consistent membership — barring casualties — but no Team should be complacent. Upper management will occasionally tear teams apart just for the small satisfaction of inflicting misery on others.

Every First Team has a corporate designation and purpose according to organizational charts. Most teams go wherever Pentex sends them and follow whatever orders they’re given. General purpose First Teams fulfill a variety of roles including direct combat, sabotage, or VIP protection. Most troops never progress beyond generalist duties, but those who show ability in specific areas may be chosen for additional training to join one of Pentex’s more specialized First Teams.

First Team from W20 Book of the Wyrm. 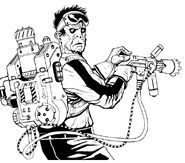 Retrieved from "https://whitewolf.fandom.com/wiki/First_Team?oldid=241756"
Community content is available under CC-BY-SA unless otherwise noted.