The werehyenas are Gaia's warriors in Africa, a continent without a wolf population. While the War of Rage did not reach Africa, the Ajaba were all but destroyed by infighting, their rivalry with the Bastet and, most significantly, the tyrannical Simba king, Black Tooth.

The Mockery Breeds are wyrm-spawned Fera that have no ties to Gaia. Some are facilitated by Project Lycaon of Pentex. They differ from fallen Fera (like Skull Pigs or Black Spiral Dancers) in that they were never connected to Gaia in the first place. Most of the Mockery Breeds have only an incomplete set of forms, as they lack spiritual patronage of their animistic analogue. 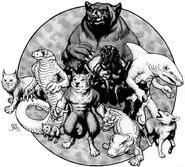